Between Arcade Fire, Drake and Justin Timberlake, it might seem that all the music hype for 2013 is used up. But if you’re looking to pick out this year’s under-the-radar darling, The Ryersonian has compiled a list of albums that are a great place to start:

Deltron 3030 –Event II
Release date: Oct. 1
Ten years ago, Del the Funky Homosapien was the king of underground hip hop, but a string of lacklustre efforts has killed any hype that might exist for a new release. So it makes sense that he returns to collaborating with Vancouver DJ Kid Koala and producer Dan the Automator under the Deltron 3030 moniker to recreate their magic. The followup to 2000’s self-titled, sci-fi inspired dystopian concept album has allegedly been in the works since 2006, so hopes are high that the kinks that have plagued all three artists in the past have been ironed out.

Brendan Canning – You Gots 2 Chill
Release date: Oct. 1
The music market is flooded with indie rock right now, so sometimes it takes someone with a reputation like Broken Social Scene’s Brendan Canning to stand out. Recorded entirely in Canning’s Toronto living room and released on his own label, the album looks to be full of beautiful, highly relaxed songs that add ambient and electronic elements with a subtle touch.

Banded Stilts – Little Village
Release date: Oct. 8
After a well-received EP and some strong festival performances over the last couple years, Banded Stilts have set high expectations for their first full-length album. Now that overwrought, gimmicky folk like The Lumineers and Mumford and Sons (RIP) have seized the airwaves, Banded Stilts will serve as a reminder that Canada is full of artists capable of restraint and thoughtfulness in the songs they write.

Junior Battles – LP2
Release date: TBA 2013
Toronto’s pop-punk scholars have yet to set a release date for their followup to 2011’s under-appreciated Idle Ages, an emotional and personal exploration of the all-consuming stresses of early adulthood. With the exception of a few live performances of new songs, previews of the album have also been scarce, but the standard they’ve set for themselves is high enough for fans to drum up the excitement that this band deserves.

This story was first published in The Ryersonian, a weekly newspaper produced by the Ryerson School of Journalism, on September 25, 2013 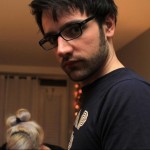 Rye professor, dog, and robot team up for rescue missions