The price I paid for a university degree

On March 27 2017, I sat on the living room sofa of my parents’ house, facing my father. It was an evening that would alter the course of my life. I had come home to hear my father sobbing. In our two-bedroom house for a family of four, it wasn’t easy to be discreet. Seeing my father in tears and breaking down is a sight I haven’t been able to forget. If you know anything about the toxic patriarchy embedded in Indian culture, you will know that this sight is a significant event in any teenage boy’s life. It is such a vivid memory — an event that I’ve gone over a thousand times in my head in the years since.

My father had just under $50 to his name and found himself at the lowest point in his career. Having spent more than three decades running a business, here he was, exhausted, depressed and hopeless. But mostly, he was embarrassed.

I grew up in a middle-class family in the small town of Hisar. Two hours west of New Delhi, Hisar is an industrial powerhouse of northern India. I spent a lot of my life with friends and family who always had more than us. It’s not something I ever remember thinking about or feeling bad about, but it’s the sort of feeling anyone who hasn’t had enough knows well. My father was big on honesty and had always made sure to teach me about the importance of a pure heart and a clean mind. Whether it be in sports, academics or socializing with friends and family, he had inspired me to always do the right thing and never take advantage of someone else. So, I often find myself wondering where he went wrong. How had he worked so hard throughout his adult life, without stepping over people or cheating, and still found himself at such a disadvantage?

I was 18 and in my senior year of high school. I had been an excellent student throughout my school career; I was an athlete, a student leader and a social entrepreneur with a grassroots non-profit organization. I had received admission offers from several universities and was excited about my future. My dad didn’t say it, but at that moment, I realized my life was going to be different from how I’d planned it. I was going to have to carry my family through a time when my parents couldn’t do it themselves.

He said in Hindi, “I am sorry, I can’t support you anymore.”

According to a 2018 UN report, income inequality in India is on the rise. The rich have continued to get richer, and the economy has grown tremendously. Poverty has fallen too,  but those who have escaped poverty, “continue to face a high risk of falling back into it,” the report says.

My father falls in this latter category. He worked his entire life, starting at an early age, to help support a family of more than 10 members. As the youngest of five brothers and a sister, he had no financial support from family or friends and found a way out of the limited means he was born into. Little did he know that 30 years later, his son would have to go through the same ordeal.

All of a sudden, I found myself feeling like I had to do something; otherwise, my dreams would slip away, no matter how hard I tried to hold on to them. I wanted to study more, learn, travel and contribute to society. I wanted to make something of myself. That evening, my dad told me he couldn’t support my dreams of going to university, and so all of this seemed secondary. The only thought on my mind at that moment was: Now what?

Knowing that I was on my own, I wrote to philanthropists, celebrities, industrialists and other individuals known to be wealthy. I remember compiling a database of high-net-worth individuals and their email addresses along with social media accounts to send them a business proposition I thought would be attractive to them. I was naive to believe that someone somewhere might want to invest in my education in exchange for me committing to work for them for the rest of my life. Yes – that’s what I wrote in the emails I sent them. It was the first time I remember trying to sell a product. That product was me.

For months after that unfortunate March evening, I spent countless hours working. At a time when my peers were taking vacations and getting ready for college, I was trying to make a few extra dollars to support my family. It had a massive impact on my relationship with them. I acknowledge now that I am fortunate just to have this family, but at the time, it seemed like I was cursed. For some reason, I couldn’t find an answer to the question: Why me? I blamed my father for the circumstances we were in and told him more than once that I was disappointed in him for not doing enough. My teenage anger only seemed to focus on what he had failed to do and not so much on what he had succeeded in doing. At a very young age, I was put in a position to make the big decisions in my family.

“It’s time to sell the house.”I said, and “Mom, I think we may need to sell your jewelry this week.”

The fact we had to mortgage my grandparents’ house, sell our family home and most other possessions to help pay for school— it says a lot about the economic “growth” we as a society keep chasing. The idea that you have to “work hard to be successful” is a capitalist scam.

The wealth gap is really an opportunity gap. In his 2008 book, Outliers: The Story of Success, Malcolm Gladwell speaks about how low-income children experience low achievements because they have fewer opportunities outside of regular school times, compared to children from high-income families. It’s not that people don’t work hard, but that working equally hard results in unequal results is the current state of the world.

“This is my son’s opportunity to realize his dreams,” my father wrote when I finally convinced him to start an online fundraiser for my education.

“This is his opportunity to know that dreams do come true, and it is my opportunity to teach him, one last time, that kindness prevails and that no matter what, good things happen to those who do good.”

He had argued against it for months. He wasn’t comfortable with letting the world know about the dire state he found himself in, slipping further every day. That one should embrace the reality of their life and play the game with the cards they’re dealt is the first lesson he credits his son for teaching him.

The more I shared my story, the more people came forward to help. A junior from high school, someone I had not spoken to very much, once approached me in school at lunch. He said he wanted me to meet his dad that evening. When I saw his father, he held my hand and put forth a thick white paper bag. I knew what it was and didn’t feel there was a need to ask. What I did ask was why. I’d never met him, let alone told him my story. He answered, “You inspire my son,” and said I didn’t need to worry about returning the money he was giving me. I was hesitant, and I told him that I wanted to pay it back as soon as I could.

“Just pay it forward and help someone when you have enough,” he said.

This summer, I’ll be graduating from the Ryerson School of Journalism. As I look back over the past four years, I am stunned that the structures in place within the so-called ‘free market economy’ continue to feed into this inequality. That a young person has to take on such a burden, both financial and emotional, just to pursue an education, sounds like an idea out of the colonial Victorian era.

Now, having lived in Toronto for more than four years; and working multiple minimum wage jobs, paying bills and trying to save up for a whole year just to be able to see my family in India for a few days; I see that he didn’t do anything wrong. When I look back at how these past years have gone by, all I remember is working. I had to miss out on developing friendships because I had to work. I had to miss out on career opportunities because I couldn’t miss my shift. I haven’t lived a regular university student life, because I have to work — all the time. It’s the way the system is set up.

The wealth gap in attaining education is steep. And there’s no one answer for how to shrink it. Solutions like a “better public education system” have been suggested as the way to go. A 2019 Atlantic article by Nick Hanauer explains why that may be oversimplifying this problem. I hope this issue finds its ground in popular discourse and that others like me, who have suffered to build a life of dignity, come forward to tell their story. That alone is the way we will find the collective strength to take on the systems that perpetuate this unequal cycle.

Maya Angelou was correct when she asked, “If it is true that a chain is only as strong as its weakest link, isn’t it also true a society is only as healthy as its sickest citizen and only as wealthy as its most deprived?” 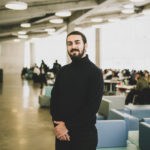 Abhi Raheja is a journalist and creative storyteller from India. Passionate about documentaries and podcasting, he has a keen interest in long-form journalism relating to politics, art, culture and spirituality. Abhi is the Editor-in-Chief of the Ryersonian winter 2021 masthead.

Abhi Raheja is a journalist and creative storyteller from India. Passionate about documentaries and podcasting, he has a keen interest in long-form journalism relating to politics, art, culture and spirituality. Abhi is the Editor-in-Chief of the Ryersonian winter 2021 masthead.

To stay financially stable, students are pursuing side hustles