It’s not every day that a young entrepreneur decides to venture into a business while still finishing their undergraduate degree. Balancing school, work and a personal life can be challenging as it is.

For fourth-year Ryerson student Eden Mitelman, this challenge intensified when she opened her boutique Emme and Edly in her second year. Her store features the latest in womenswear clothing and accessories handpicked by Mitelman herself. 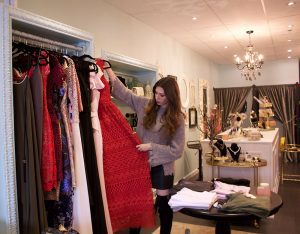 The shopping experience at Emme and Edly is extremely personal. Eden deals directly with clients from beginning to end. This allows her to get a sense of who they are and what they are looking for. (Photo by Simona Catalano)

For Mitelman, clothing and styling is a great passion. When the chance of opening her store arose, she didn’t hesitate to take the opportunity.

“It wasn’t something that was going to be easy, but it was something I have always wanted,” she says.

Mitelman learned her work ethic from her mother. She says her mom would tell her, “If you want something you must be prepared to work very hard for it.”

In order to make opening the store possible financially she applied for government grants, in addition to dipping into her savings.

Located just north of Finch on Yonge Street in Vaughan, the Emme and Edly storefront was something that couldn’t be passed up. The space today is worth twice as much as what Mitelman got it for two years ago. The lease for the intimate boutique was the cheapest she found in the area.  Although she says she had to compromise on the location, with it being an older space that requires a lot of maintenance and not having the layout she would have liked, it was a great place to start.

“If I hadn’t taken the opportunity, I knew it would be something I would come to regret,” she says, hanging up new arrivals in the showroom.

But now in her final year, the stress of balancing school with owning her own business is really catching up to her. As the sole employee of her small boutique, Mitelman is in charge of every operating function, from being at the store full-time to attending meetings with suppliers. 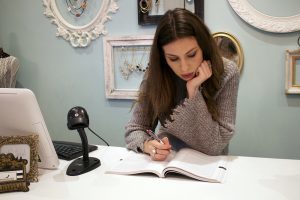 Making orders is extremely important. Orders for all upcoming seasons must be made well in advance to ensure they arrive before each season. (Photo by Simona Catalano)

Her clientele relies on the boutique and its services for the majority of their styling needs, including personal shopping and closet organizing. These tasks require her to be available outside of the store’s operating hours. It’s seldom she gets a day off, usually working all hours every day of the week.

Mitelman said it was important to remain in school while taking on this adventure. However, the store demands conflict with school responsibilities.

“I need to be at the store as much as I can be,” she says, her criminology textbook sitting on the coffee table. “To avoid the time I spend away from the store I plan my classes carefully.”

Mitelman schedules her classes to minimize the amount of days and time she spends travelling into the city. All of her course electives are taken online. The one day she spends commuting to school is for her two mandatory classes. On this day her mother watches the store.

“It’s been great knowing she is there when I need to go to school,” she says.

At times, Mitelman feels it seems like balance is impossible and can get extremely overwhelming. Fourth year is much more work than years past, and with Emme and Edly doing well it’s been strenuous on her emotionally, physically and mentally. However, she says that the added stress of school will be over soon.

“The smart and right choice was and still is to finish my degree no matter what,” she says.

Mitelman likes to focus on the amount of things that can be done within the day rather than what will have to wait. “I prioritize the most pressing tasks based on their deadlines,” she says.

So Mitelman writes  out her schedule in the morning, checking off each task she finishes throughout the day. “If you don’t set realistic expectations, you’ll constantly feel like you’re failing yourself. I have learned this the hard way.” 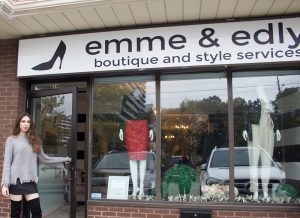 Eden Mitelman first opened the doors to her boutique, Emme and Edly on June 20, 2016. (Photo by Simona Catalano)

Time management is really her best friend. She credits her ability to get a variety of work done to the nature of her business. She explains that the boutique is not overly dependant on foot traffic, which allows her to multitask. She adds that she doesn’t need to always be doing things for the store while she is there, like she would need to be if she worked for someone else. But ultimately, Mitelman attributes a lot of her success to an excessive amount of coffee and working endlessly to see this project succeed.

Like any new business, Mitelman admits there have been several hiccups along the way. But as she approaches the boutique’s two-year anniversary and her own graduation, she continues to put her best foot forward while working towards these two milestones.