The road to varsity rugby at Ryerson 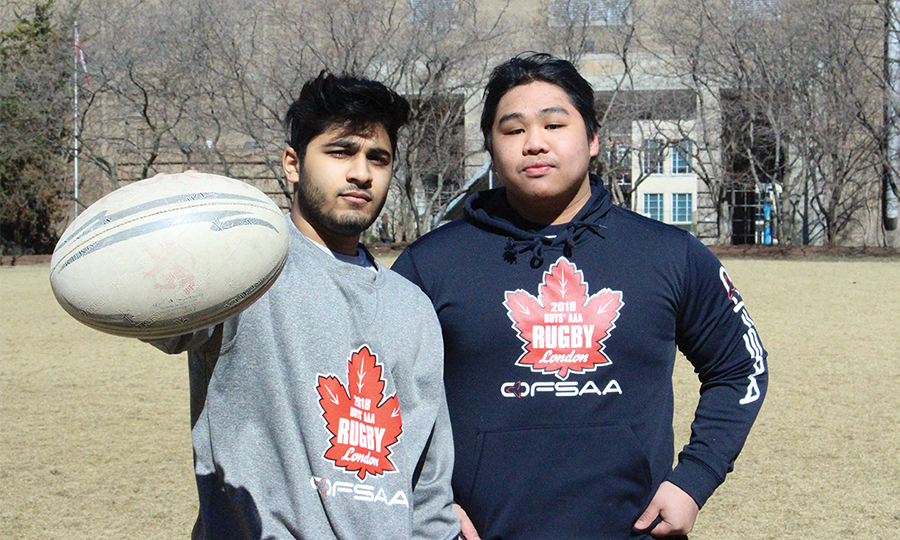 Rajiv Bahadur, left, and Ian Custadillo, right, are in the early stages of creating a varsity rugby team at Ryerson. (Julia Nowicki/Ryersonian)

Ryerson may become home to a new varsity team in the near future, as students begin the process of establishing a men’s rugby club on campus.

Ian Custadillo and Rajiv Bahadur are first-year students in the business management program at Ryerson. Since the beginning of the school year, the pair were interested in the prospect of starting a team, noting a large demand amongst fellow students.

“There’s a lot of guys at Ryerson that played competitively and went to OFSAA in high school,” Bahadur said. “But here at Ryerson, they don’t have the opportunity to showcase their talents. They’re really eager to get out there and start playing rugby again.”

However, the pair has a long road ahead of them. Tiona Taylor, competitive clubs co-ordinator at Ryerson, said via email that the process of setting up a varsity team that competes in Ontario University Athletics (OUA) requires support from the Athletic Department, and there is usually a 12- to 18-month waiting period.

“There are OUA standards and expectations that must be met as well as a sustainable coaching and funding model in place to ensure continuation of the team,” Taylor said. “There are also eligibility issues and other administrative commitments that must be maintained at the OUA level.”

For the time being, Custadillo and Bahadur are planning to register their team in the competitive clubs league, until such a time where they feel confident in their successes and sustainability to compete in the OUA. Ryerson’s rugby team would be competing against other developing teams like York University and University of Ottawa, Bahadur said.

The students have already met with the competitive clubs co-ordinator and are in the process of finding funding, coaches, a place to practise and, most importantly, a team of 20-30 students willing to train at least once a week and travel to games that would most likely be away from home.

“It’s all student-run mostly,” Bahadur said. “It’s all up to us to figure out budgeting logistics, funding, get players, where we’re going to practise and all that stuff. We’re just in the beginning stages right now.”

In terms of funding, the team would be mostly supported by a club fee of around $100 as well as the RSU Athletics Grant and Department of Student Life Student Initiative Fund, should their applications be accepted. A new initiative successfully pitched to the Student Initiative Fund can receive up to $9,000. The pair are also in talks with Toronto Inner-City Rugby Foundation (TIRF), a non-profit community development organization that works to reduce the financial, geographical and cultural barriers that prevent individuals from entering the sport.

The team hopes to make the registration deadline in June. The season would run from early September until November, with tryouts held in late August.

Taylor is excited about the prospect of working with a new team at Ryerson.

“It is always a pleasure for the Ryerson Athletics and Recreation Department to receive students who are passionate about starting a Ryerson competitive club. Working with a group of driven and motivated members of the community who are wanting to make a difference is a great thing,” Taylor said. “We do our best to facilitate their vision and help make it a reality, so long as a student group is committed and willing to work through all the administrative requirements necessary to be a Ryerson competitive club.”

Who do you write for: The intertwining worlds of fiction, poetry and journalism