The Ryersonian weekly wrap is a news audio series produced by senior students in the School of Journalism in Toronto. It features weekly news from ryersonian.ca and from the Canadian University Press.

This week on The Ryersonian weekly wrap, Steven and Danni tell you about a bomb threat at Ryerson campus, over 200 jobs get cut at the CBC, the sunshine list reveals Ryerson’s top earners and that dreaded TA strike at the University of Toronto has officially ended, with just over a week left before exams. 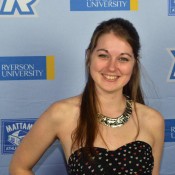 RyersonianTV for Mar. 27: Co-pilot who deliberately crashed Germanwings plane was struggling with an illness, TA strike at UofT over, updates on Ghomeshi trial