The Stairs: A raw look at drug use

Harm reduction and opioid addiction were the focus of an award-winning documentary shown at Ryerson’s School of Image Arts last week.

The Stairs tells the life stories of Marty Thompson, Greg Bell and Roxanne Smith, who have all survived years of street involvement and drug use in Toronto’s Regent Park neighbourhood. The three met through the Regent Park Community Health Centre, where Thompson now works and where much of the documentary is filmed. 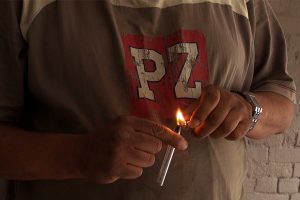 Harm reduction and opioid addiction is the focus of the documentary. (Courtesy of The Stairs)

Thompson used to go to Regent Park every day for his drug use — he couldn’t function without his daily injections. When the opportunity came to get $20 per week to attend rehab meetings at the health centre, he grabbed it.

Thompson didn’t hide that he was going to use the money for drugs. But when he actually started to listen to what was being said at the meetings, he realized he could turn his life around.

Bringing the film to Ryerson was the initiative of Christina Usanov and Annita Velasque, third-year nursing students. The third year of the program is centered on community health, and Usanov had been working with Thompson as part of her placement.

“One day, we were going for a walk in the Moss Park area, and he was telling me what it was like to grow up there, experiencing all the drug use and homelessness,” Usanov said.

“I told him, ‘Someone should really make a movie about this,’ and he laughed and said they already had.”

Velasque said her and Usanov’s reason for bringing the film to a wider audience at Ryerson was to give students and faculty a more humanizing look at drug users and homeless people.

“I think everybody at Ryerson has likely had an encounter with a homeless person,” Velasque said. “Being able to show they’re not just a stereotype and taking away some of the stigma … if we accomplished that for even one person, we’re happy.”

The screening came shortly after the opening of Toronto’s first, permanent supervised injection site at 277 Victoria St., steps from the Ryerson campus. The Victoria Street clinic is the first of three city-run supervised injection sites expected to open this year. There is also a volunteer-run operation in Moss Park. But the Moss Park clinic is set up in weather-proof tents, giving the appearance it can be taken down at any time.

“The amount of time and effort it took to get the first one open is herculean. It’s long overdue, but better late than never,” Gibson said.

The Stairs is Gibson’s directorial debut. It premiered at TIFF in 2016 and won the Toronto Film Critics Association award for Best Canadian Film of 2016. He shot it over five years, between 2011 and 2016, with the hopes of giving a non-judgmental look into the lives of opioid users.

The documentary has been screened in various cities across Canada and countries around the world, including South Korea, Argentina and Germany. Its title refers to the places “hidden in plain sight” where homeless people spend their lives.

In 2015, there were over 100,000 client visits to harm reduction services and almost 1.9 million needles were distributed, along with other sterile injection supplies, through community agencies across the city, according to the City of Toronto’s website.

The Ryersonian has previously reported on the RSU equipping its equity service staff with naloxone kits after the Ryerson administration decided not to carry them on campus. Naloxone is administered in cases of opioid overdoses to counteract the effects of drugs like fentanyl.

“I applaud the student union for taking that initiative. I think it’s a great move on their part,” Gibson said. “Authorities don’t necessarily act quickly enough when responding to what is a massive health crisis, and sometimes you need people who have the training to save lives.”

During a Q-and-A session following the screening, Thompson said he wanted the general public to know that drug users “are not useless.”

“A lot of the time (in class) we discuss these issues, but we feel like we’re in a bubble. We go home and forget about it because we know we’re going to get the grade and move on,” Usanov said. “This film is raw. It’s very hard for some people to see – being able to get that to other people at Ryerson (is) really important.”