The tipping point: Students weigh in on how much to give servers

By: Kayla Douglas and Madison MacNeil 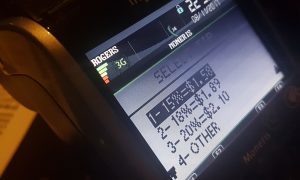 Dante Galea finished his sausage pizza last Friday night, sitting on a bright red chair with his friends at Terroni, an Italian restaurant on Adelaide Street. Satisfied, he was ready to pick up the tab for the table. His server handed him the debit machine, which prompted him to leave a tip.

Galea was no longer satisfied.

Three default tip options flashed at him in the dim restaurant — 18 per cent, 25 per cent and 30 per cent.

Default tipping on a pay machine allows customers to choose from an automated set of tipping percentages at the start of the transaction. If diners want to tip a different amount, they have to think more about what they want to pay— they may even be required to do a bit of mental math.

Although deferring to a default option is easier, Gabor Forgacs, an instructor at the Ted Rogers School of Hospitality and Tourism Management, said students who are trying to save money should be wary of default tipping while dining out.

“(Default tip options) are practical (for those) who are numerically challenged, but they are also slightly deceiving,” Forgacs said.

According to Forgacs, the total cost of a dining experience before the tip includes both the price of the meal and tax. If the meal is $20, then tax would add $2.60 to the price. As a result, customers are tipping on the tax as well, rather than just rewarding their waiter for the value of the goods and services.

“That increases the cost of the tip, which isn’t necessarily fair, but not enough customers would pick up on it,” he said. “(Default tip options) aren’t necessarily forcing (people to pay more), but there is definitely a higher willingness. That’s what happens when people just push a button (to pay).”

A recent study further demonstrated that default options on payment devices can drive up the cost of tipping.

In a 2014 American Economic Journal study, New York City taxi passengers were given two options on a pay machine at the end of their ride: they could type in their own tip amount or they could select one of three default tip suggestions, ranging from 15 per cent to 30 per cent.

The results suggested that the more expensive the default tip options were, the greater the average tips tended to be.

Though this study only dealt with taxi fare, Frederic Dimanche, director of the Ted Rogers School of Hospitality and Tourism Management, said its findings could be applied to restaurant tips.

“People are usually in a hurry so they don’t really pay attention to (what they tip). They just want to (leave) the cab or restaurant,” he said. “I think there is a psychological aspect (to tipping).”

“People will just pick an option they believe is right, like 20 per cent. If people offer (something below that), they feel as though they are being cheap,” he said.

As manipulative as the process of tipping can be, Forgacs said it’s not going away anytime soon.

“Tipping is culturally and historically embedded in the hospitality industry,” he said. “We have to accept the reality.”

Tipping can look different all over the world, and the North American way can be surprising for newcomers like Charlotte Walravens, an exchange student at Ryerson.

Before Walravens came to Toronto from Belgium, she used Google to determine how much she should tip in Toronto. She found an article that said a 10 to 12 per cent tip was the norm. When she arrived, she quickly found out that wasn’t the case. 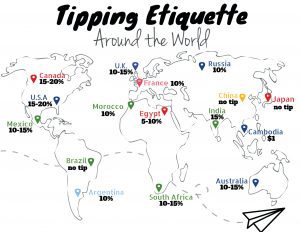 “(In Belgium), we tip two euros (about C$3) when the service is good, but I think here people need the tips. Back home, servers get a good salary,” she said.

In Ontario, the average hourly wage for servers before tips is $10.10. Servers in Belgium make about $16.24 an hour before tips.

Melessa Neyt, a Ryerson exchange student who worked as a server in Belgium for a year, said the tipping rates in Toronto are even more shocking.

“I don’t get tips, but that’s normal for me. I think it’s kind of sick (customers) have to pay so much extra because of (servers’) low wages,” she said. “It’s just something I’m not used to.”

Hannah Kavoosi, a server at two restaurants in Toronto, is used to relying on tips to keep herself afloat. If you want to dine out but you’re not financially prepared to leave a tip, Kavoosi said the solution is simple.

“Don’t go out to eat at a restaurant. If you are hungry, eat at home,” she said. “When someone is catering to you, it is custom to tip.”

On the other hand, Kavoosi, a fourth-year Ryerson sociology student, understands the financial struggle of post-secondary life.

“I do think it’s fair to ask students to tip (over 15 per cent), but I also understand there are other priorities they must allocate their money towards,” she said.

But for Galea, asking students to tip over 15 per cent is too much.

“A lot of us aren’t making a lot of money and I’m sure many students can barely afford the meal,” Galea said.

Restaurants need to be wary of their default tipping options, too.

The American Economic Journal study also found when the automated options were pricier, passengers were more likely to not leave a tip at all.

However, students can walk away from a dining experience with their bank accounts mostly intact if they remain vigilant.

“Students should try to say, ‘Listen, this is the tip I am comfortable with and that’s it.’ Just be brave and don’t feel like you have to tip extraordinarily,” Forgacs said.

Collaborate at the Collaboratory