Thrive to survive: How comic book stores stay in business

All are commonly found in a cafe or espresso bar, but comics?

Coffee and comics aren’t a traditional combination for superhero fans, or café aficionados. The two only work together at The Black Canary and Silver Snail thanks to the current popularity of superhero culture.

“If the store and comics were held in the way they were in the mid-90s and you had a café, it wouldn’t be a cool thing to come… because a comic book store (was) not really a welcoming place,” said Brian Hamelin, co-owner of Silver Snail.

“You would be like ‘I’m going to get my coffee and leave as quickly as possible,’” adds Stefan Campbell, manager of The Black Canary.

Step inside The Black Canary and you know that isn’t the case. Customers enjoy americanos and lattes, sipping and conversing like they would at any other café. There just happens to be a comic book shop attached. 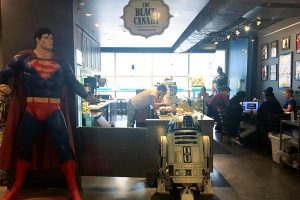 Ties between The Black Canary and Silver Snail aren’t merely spatial. The café embraces comic book culture. Beverages are named after iconic characters, like a maple latte dubbed “Northstar,” the codename of Jean-Paul Beaubier, a Canadian member of the X-Men.

Even the name of the café is a nod to nerd culture, taking inspiration from the classic DC character of the same name, Black Canary.

But the café isn’t the only one to embrace comic books. So do The Black Canary’s customers, creating an economic symbiosis benefiting both the café and Silver Snail alike.

“We get a lot of customers… who come and pick up a coffee… especially Ryerson students, who come for the café and then they’re like, ‘Oh I’m going to get into comics, what comics should I get?’” said Campbell.

Comic book culture entering the mainstream has definitely influenced the customer exchange between Silver Snail and The Black Canary.

Superheroes and comic books nowadays have “so much more casual appeal” said Hamelin. “It’s far more likely (today) someone will come into the café, then head over to the comic store and buy something.”

Despite the massive popularity of superheroes and geek culture, comic books themselves aren’t altogether profitable.

In the last year, two downtown comic books shops not far from Silver Snail and Ryerson, One Million Comix and Hairy Tarantula, closed.

To maintain profitability, especially in a city like Toronto where rent is always on the rise, comic book shops need to diversify.

That wasn’t the main incentive behind creating a fusion comic-book-shop-and-café in Silver Snail, but the marketing hook wasn’t lost on Hamelin.

When moving locations from Queen Street to the current Yonge Street location six years ago, Hamelin, who purchased Silver Snail from its previous owner, realized carving out space for a café was “something that we can say we do that not everybody else does.”

Other Toronto comic book shops have had to diversify in other ways, simply because comic books alone don’t pay the bills.

“If you just do comics, you’re going to die a slow, lingering death,” said Kirk Sutterfield, owner of West End Comics in Parkdale.

“Comic books themselves are the biggest albatross because they cost a lot for me to buy and they don’t sell off the rack so well.”

New comics don’t have a long shelf life. For the most part, Sutterfield is forced to put unsold comics into the “$2 bin,” selling them at a loss.

To offset the cost of comics, Sutterfield has stopped stocking the shelves with the most recent issues, only ordering comics for “pull list” customers, those who have pre-ordered specific titles or series.

But comics are only one part of modern-day geek culture. West End Comics is stocked with all manner of superhero-branded paraphernalia, tabletop board games, and action figures.

That’s how Sutterfield is able to sustain his shop. Board games, toys for kids, and merchandise are simply more profitable. 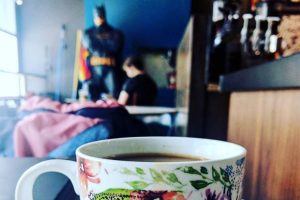 On the other end of the spectrum is The Beguiling, a Toronto comic book institution. Originally in Mirvish Village and currently at 319 College St., The Beguiling has been operating in Toronto for over 20 years.

Peter Birkemoe is the owner and manager of The Beguiling, and has been since 1998. Birkemoe has a very different approach to operating a comic book shop in modern-day Toronto.

“We don’t carry… toys or fidget spinners or mugs or other things emblazoned with comic book characters, we’re focused on the comics themselves and that is a specialty that… customers coming in [are] really pleased to see,” said Birkemoe.

All manner of comic books can be found at The Beguiling, from superhero comic books to manga to works by unknown artists. The diverse array of items, a knowledgeable staff, and a commitment to both local and international creators are reasons outlined by Birkemoe for The Beguiling’s continued success.

Other comic book shops, however, face a problem aside from the pure profitability of comics, according to Birkemoe.

“Comic book shops not being welcoming is a problem that comic shops have had to wrestle with, and a lot of people in the industry are working hard to change that.”