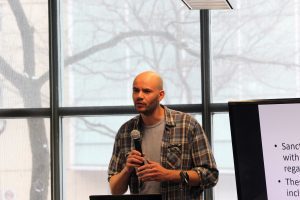 Toronto is not the sanctuary city it claims to be, said Graham Hudson at the Ryerson University school of journalism’s teach-in on Tuesday. Hudson said that sanctuary cities are not working, and Toronto should stop calling itself one.
Hudson is an associate professor and the undergraduate program director for the department of criminology at Ryerson. He recently co-authored a report stating the city has never provided adequate leadership or funding to make  Toronto a sanctuary city.
“It’s just not working. The reality is that city council has declared the city to be a sanctuary city, but provided no additional funding,” said Hudson. Toronto was the first Canadian city to declare itself a sanctuary city in February 2014, after city council voted 37-3 in favour of the decision.
Sanctuary cities are supposed to give all residents full rights to public services without requiring documentation status. Hudson said there has been little to no public outreach and funding towards the services that would make Toronto a sanctuary city. As well, Toronto police were found to be “routinely doing identity checks,” which nullifies the definition of a sanctuary city. He said that in the United States, sanctuary cities work better.
That’s because they have “more political power than those in Canada,” and they “have much bigger populations [and] a lot more…funding.”
However, even though U.S. municipalities still recognize the need for sanctuary cities, this could be changing with President Donald Trump’s executive order issued on Jan. 25, which denies federal funding towards U.S. sanctuary cities. Mayor John Tory reaffirmed Toronto’s status as a sanctuary city on Jan. 31 following Trump’s announcement.
Hudson spoke at Ryerson on Tuesday with Metro Newspaper’s managing editor, Melita Kuburas. The pair spoke about covering refugees in the media, and the definitions of sanctuary cities.
This article was published in the print edition of the Ryersonian on March 16, 2017.
#media#sanctuarycityJournalismRyersontorontoTrump
0 comment
0
FacebookTwitterEmail