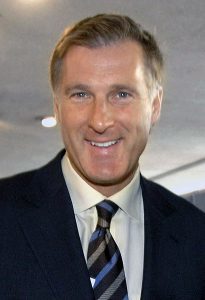 Ryerson is the most recent battleground for the top two Conservative leadership candidates.

‘Mad Max,’ or Maxime Bernier, the MP for Beauce, Que., was the latest to visit while candidate Kevin O’Leary, the entrepreneur of Dragons’ Den fame, visited Ryerson the week before.

Earlier in March, CBC pollster Eric Grenier said O’Leary and Bernier, the top two candidates, were neck and neck in the race that includes 12 more candidates.

Bernier spoke about his free market policies at the local pub, Lou Dawgs, as part of the event hosted by Ryerson Campus Conservatives, who also hosted O’Leary.

“The campus is the marketplace of ideas,” said Bernier, who argued he was the best candidate for students.

“Because I’m authentic, because I’m real, because what I’m telling you is not buzzwords for the media, it is not an empty slogan, it is what I believe and what I’ve been fighting for, for the last 10 years,” said Bernier.

Party members will decide on their new leader on May 27.

Justin Haughton, general member of the Campus Conservatives and a second-year politics student, said the club’s goal is to make sure Ryerson students are more politically invested.

“Personally, I think both Kevin O’Leary and Maxime Bernier do a very good job of reaching out to attract the youth vote,” said Haughton.

Fourth-year politics and philosophy student Zachary Pothier, who also attended O’Leary’s talk, said that while O’Leary appeals to students, he doesn’t know where the candidate’s policies stand. Instead, it was Bernier who drew him towards the Conservative party.

“Normally, I don’t like the Conservative party, but I really think that Maxime Bernier brings a new and fresh voice that is sorely lacking in Canadian conservatives and Canadian politics,” said Pothier.

“For the first time in my life, I joined a political party and it’s the Conservative party.”