Today marks the beginning of Trans Awareness Month, a celebration that aims to honour and recognize the trans community on Ryerson’s campus. 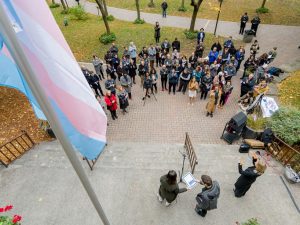 “In the past, Trans Day of Remembrance (Nov. 20) was recognized through a small ceremony, but we’re really proud and excited about the number of educational and advocacy-focused events spanning the entire month this year,” Laurie Stewart, the co-chair of Positive Space at Ryerson, said in an email response.

Positive Space at Ryerson is a staff and faculty community network for people of all sexual orientations, gender identities and gender expressions.

The events hosted by Positive Space  include three workshops focused on inclusion and supporting trans individuals on campus. There are also panels on both trans inclusion in sport and in fashion and clothing.

“Trans awareness month is important because our trans community members continue to experience harassment, discrimination, violence and systemic barriers on campus and in our communities,” Stewart said.

Support for trans students on campus is offered by the Trans Collective at Ryerson, which is one of the Ryerson Students’ Union’s equity service centres.

Camryn Harlick, vice-president of equity at the RSU, identifies as two-spirit and transmasculine. As a member of the Trans Collective at Ryerson, Harlick also says it would benefit campus if trans events happen all year, not just throughout the month.

“A lot of us haven’t had the privilege to talk about trans issues in safe zones. We also talk about the Western perspective and the white trans community, but we don’t talk about racialized trans people,” Harlick said.

Stewart affirmed that Positive Space reached out for the opinions and participation of employees who have self-identified as 2SLGBTQ+ in the Diversity Self ID survey conducted through Ryerson HR.

The first event of the month, the transgender pride flag raising ceremony, will be held today in the quad. The flag will remain raised for the entire month of November.