Vivek Shraya says she used to love shopping, but now hates it. It reminds her that she either dresses the way she wants and worries about incurring violence, or she erases her identity.

A Toronto-based artist, Shraya was one of three panelists who discussed trans inclusion in clothing design and fashion on Nov. 21 as part of several events held for Trans Awareness Month.

Shraya spoke alongside Jalisa Luces-Mendes, a Ryerson graduate and founder of Toni Marlow Clothing, and Jack Jackson, owner and founder of alljackedup and the Ties to Love campaign. As a trans woman, Shraya addressed the challenges of fashion and the innovations and creativity trans awareness has inspired.

Shraya elaborated on the challenge she faces in retail stores packed with clothing designed mostly for cisgender women (women who identify with the gender they were assigned at birth.)

“So much of large clothing is about detracting from the body, so colour is immediately gone,” explained Shraya. “As soon as you go into anything beyond size 14, everything becomes black or grey.”

She added that the problem isn’t exclusive to trans women, and that “it’s about hiding the body as opposed to celebrating the body.”

Yet representing herself the way she wants presents her with a dilemma.

“I can choose to present myself the way I want to, (which would) involve a bare minimum of staring. It seems harmless, but when you go on public transport and every second people are just staring at you, it can feel quite harmful.”

Shraya is also concerned with verbal and physical abuse everyday.

“[The] first thing I think about when I wake up is safety,” she said.

Shraya elaborated on the ways in which she’s perceived and how self-identification isn’t understood by many.

“Transness, for me, also means performing a certain type of hyper-femininity,” she said. “Because I am not seen as a girl, trans girls have to be extra, so cis people see us [as women].”

Luces-Mendes created an underwear line that allows “every person to feel comfortable in their bodies and express their gender identity with pride,” according to the Ryerson EDI website. The company values diversity, inclusivity, visibility and representation.

The TRSM entrepreneurship graduate said they never used to be able to find the right items and clothing sizes “in the section I am supposedly supposed to shop in.”

Luces-Mendes, who uses they/their pronouns, said their parents had opposite approaches to fashion. Their dad’s family was more traditional, while their mom dressed them in any clothing regardless of it being gendered.

“My dad’s family, they would never let me go in the boys’ section, whereas my mom was the total opposite,” Luces-Mendes said.

“I have a lot of friends that are female-identified but masculine-presented, and they can buy whatever they want, because they’re big and tall. I can’t find clothes that fit me, that look the way I want, that are my size, because apparently… cisgender men are not small, ever.” 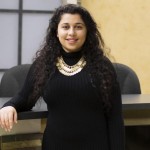