Ryerson’s transgender community is rejecting changes made to a transgender rights bill before the Senate, but they say it won’t deter them from campaigning for all-gender washrooms.

On Wednesday, the Senate passed an amendment to exclude “sex-specific” facilities from Bill C-279 which aims to add gender identity to the Canadian Human Rights Act. This means that, for example, a trans woman would not have access to female gendered washrooms, change rooms, and crisis shelters.

ENG 155 is one of just 48 all-gender washrooms on Ryerson campus, only seven of which are wheelchair-accessible. Photo credit: Emily Joveski

At Ryerson, the RSU Trans Collective has been campaigning since 2014 for more all-gender washrooms that have no restrictions on usage based on sex or gender. Markus (Star) Harwood-Jones, the collective’s coordinator, says their goal is to have the same number of male, female, and gender-neutral bathrooms on campus.

“We are hoping this will be the beginning of a larger transformation,” Harwood-Jones said. “We believe that having more all-gender bathrooms on campus will open up student’s minds and help them understand and respect trans students. We deserve to access this space as much as they do.”

By the end of this semester, the collective hopes to see one male and one female restroom in both the Student Campus Centre and the Victoria Building converted into all-gender restrooms.

According to Harwood-Jones, there are 28 all-gender washrooms on campus, and only seven that are fully wheelchair accessible. There are about 150 restrooms on campus total, but none of them are all-gender in the Student Campus Centre.

“I work inside of the Student Centre, and if I wish to use the bathroom and don’t want to use the male or female bathroom, I’d have to leave the building,” said Harwood-Jones.

But Harwood-Jones doesn’t believe that the new amendments will hurt the collective’s progress in any way.

“The Bill is going to to back to the house, which means it’s already dead,” said Harwood-Jones. “I feel that this action was intended to add insult to injury, and also to enshrine transmisogyny into the legal system even more.”

Sen. Donald Plett said the without the amendments, the Bill would be open to abuse and allow people to claim to be transgender to enter a gendered facility and commit assault. However, many activists have criticized his amendments as discriminatory.

“I feel this was a transphobic act, that Plett was targeting transgender women, which he calls biological men, which is an offensive term for a litany of reasons,” says Harwood-Jones. “It’s taken a bill that was for trans human rights, and transformed it into transphobic legislation. It’s not a step forward, it’s two steps back.“

If Bill C-279 gets passed, schools could ban trans students from using bathrooms of the genders they identify with. Many trans students say they have had negative experiences using gendered bathrooms and would prefer all-gender ones.

“I often use the male bathroom, because I feel okay with that sometimes, but I occasionally get dirty looks,” said Harwood-Jones. “People have been told to get out of the bathroom, been called creeps, and all kinds of negative things.”

The current Bill has been stuck in the Senate since 2013, and is not the first “trans bill of rights” to fall apart after being sent back to the House.

“I think the bill will almost certainly die,” said Harwood-Jones. “My heart goes out to the organizers, who have worked for years on this Bill, only to watch it die again and again.”

The RSU Trans Collective will be ramping up their all-gender washroom campaign next week, with posters across campus flashing their hashtag #GiveACrap. 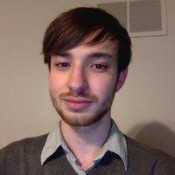 Daniel Rosen was a News Editor at the Ryersonian. He's interned at The Town Crier, Vaughan Today, and Canada.com. He's also the features editor for Built to Play, a weekly podcast about video games news for the arts inclined.

Daniel graduated from the Ryerson School of Journalism in 2015.

You can watch him suffer in real time on twitter @Daniel_Rosen.

Daniel Rosen was a News Editor at the Ryersonian. He's interned at The Town Crier, Vaughan Today, and Canada.com. He's also the features editor for Built to Play, a weekly podcast about video games news for the arts inclined. Daniel graduated from the Ryerson School of Journalism in 2015. You can watch him suffer in real time on twitter @Daniel_Rosen.