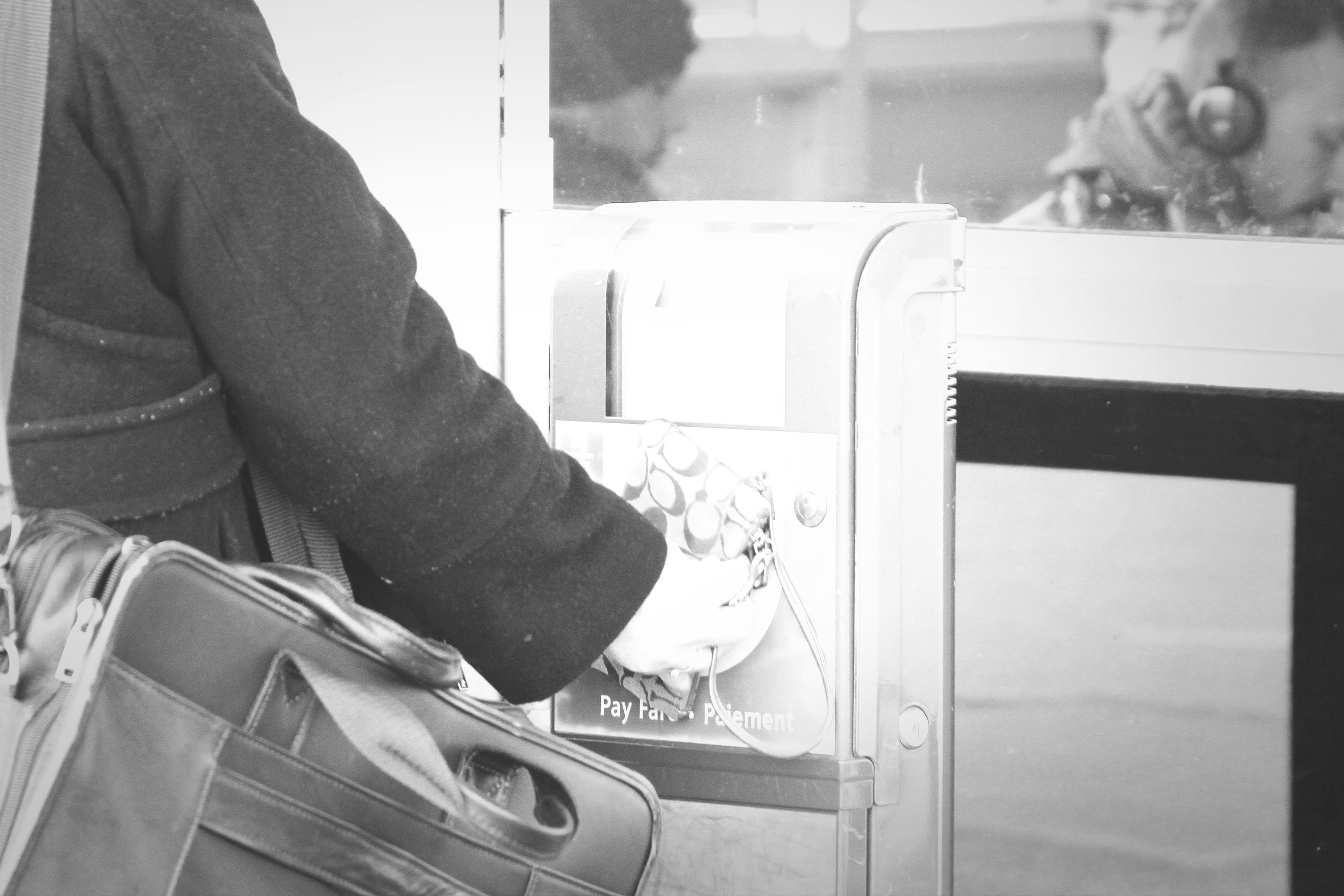 A woman taps her Presto card onto the card reader to have her fare deducted. (Daniela Olariu)

If you rely on public transportation to get around the city, get ready for some changes in the new year.

The Toronto Transit Commission is changing its traditional fare media from tickets, tokens and metro passes to just one method of payment: the Presto card.

The Presto rollout in Toronto comes after the card became popular on the GO Transit regional network and suburban transit agencies.

According to Heather Brown, TTC’s senior communications specialist, the rollout is happening in stages and a few of those stages have already been complete.

“Presto has been slowly introduced on the different modes of transportation in Toronto,” she said. “There’s still a significant amount of change to happen with the presto implementation in 2017.”

The phasing out process will begin in 2017, but tickets, tokens and metro passes will still be available for purchase at the beginning of the year. Brown urges people to continue to use the regular TTC fare media until they say that when the time is right to switch.

“I think the biggest thing for students and any customers that use it right now is that nothing for them changes immediately,” she said. “There will be a point when we will stop selling, but these discussions are still ongoing.”

How it will work

The TTC will stop selling their traditional fare media before they stop accepting it to give customers plenty of time to transition to Presto. Towards the middle of 2017, they will have the ability to offer metro pass products on Presto, and students and seniors will still be eligible for their regular discounts.

“A monthly or weekly pass like we have now will function the same way but it would be on the Presto card instead.”

For tourists and infrequent riders who need to get around the city, a limited-use media card or ‘LUM’ will be introduced to replace tickets and tokens. It would be similar to using a token today but instead it will be a paper Presto card with a chip that visitors can tap on a card reader to have their fare deducted from it.

Eventually, the fare-collector booths in subway stations will disappear. Instead, there will be customer service agents interacting with customers and helping them navigate the city. Vending devices will be set up where people can buy Presto or LUM cards and load them. 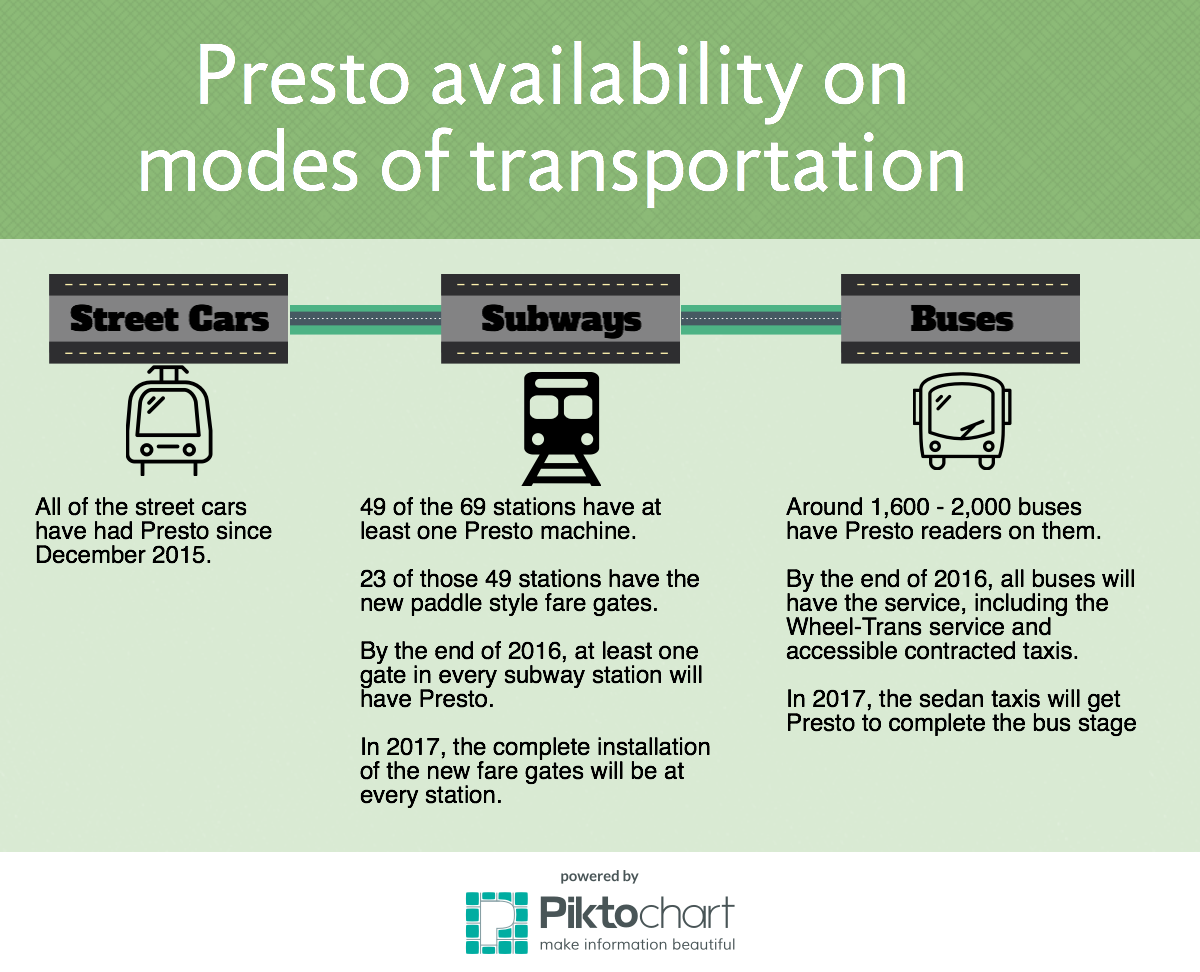 RSU’s input on the change

The president of the RSU hopes to have one of these vending devices on campus once the Presto rollout has been finalized.

“Transportation is a top priority for us and over the summer we’ve had multiple meetings with GO transit and the TTC.” Obaid Ullah said. “We expressed our interest in setting up a Presto station in the building and having a machine where students can fill up their cards and utilize the student discounts which is still available for students.”

Currently, students can obtain the student discount card for Presto from the university, but they still have to activate it at a GO station.

On campus, students have a mixed opinion on Presto becoming the new fare media.

Jazan Grewal, a fourth-year RTA student takes the GO bus and the TTC for subway and buses. She thinks having one form of fare media will be easier and more convenient.

“Buying tokens and tickets is time consuming so this will make my life easier,” she said.

On the other hand, Tristan McGuirk, a fourth-year professional communications student who commutes from Hamilton, thinks the change could be frustrating for the average TTC user.

“I use Presto everyday so it wouldn’t affect me directly but I know how easy it can be to lose track of your Presto balance,” he says. “I can already see people rushing to get onto the subway or streetcar and having their fares declined. It could be an inconvenience for people to have to constantly load money onto their cards.”

Brown states that people can set up auto load agreements so that money automatically tops the card when it reaches a certain threshold. This way, people won’t have to worry about whether they have enough money available on their cards.

This story is going to continue to evolve as more details shape up around the decommissioning of TTC’s legacy fare media.

“I think change is hard and challenging for some but we’re hoping that people won’t find the change is much of a change at all. It’s just instead of dropping a token, ticket or cash into a fare box, they’re tapping their Presto card on the card reader to have their fare deducted,” Brown said.

From Ryerson to Tanzania