BREAKING NEWS
Top five COVID-19 safe Halloween activities for students
U SPORTS cancels winter national championships, all games until March 2021
Ryerson’s Jack Layton Chair hosts livestream of educators and musicians during COVID-19
Is your cough COVID, a cold or the flu? How to tell the...
Ryerson to launch a virtual pop-up gallery to raise awareness about sexual violence
Arts & LifePerformance ArtsTheatre

If you’re stressed out about your grades, your finances or your future Ryerson Theatre School’s (RTS) latest production might offer you some validation.

RTS put on its first performance of the winter semester on Friday, with the opening night of You Can’t Take It With You—a comedic play that premiered on Broadway in 1936.

The play is easily enjoyable with a relatable plot and a simple — yet clever — script.  It’s focused around the delightfully insane Sycamore family, most of whom are unemployed and live off corn flakes and Frankfurters. Even so, they are perpetually happy.

The head of the household is often referred to as “Grampa,” a former businessman, played by Hayden Finkelshtain, who retired simply because he didn’t like working. Finkelshtain delivered a perfect balance of eccentricity and wisdom — you might think he’s crazy, but you’d follow every word of his advice nonetheless.

His daughter, Penny (Laura Katherine Hayes), writes scandalous plays because a typewriter was delivered to their house by accident. She is married to Paul (Anthony Perpuse), who builds fireworks in their basement without a license, often setting them off accidentally. Together they have two daughters. One is Essie (Hannah Galway), an aspiring ballerina who makes candies. She is married to Ed (Robert Iannuzziello), an unemployed xylophonist. 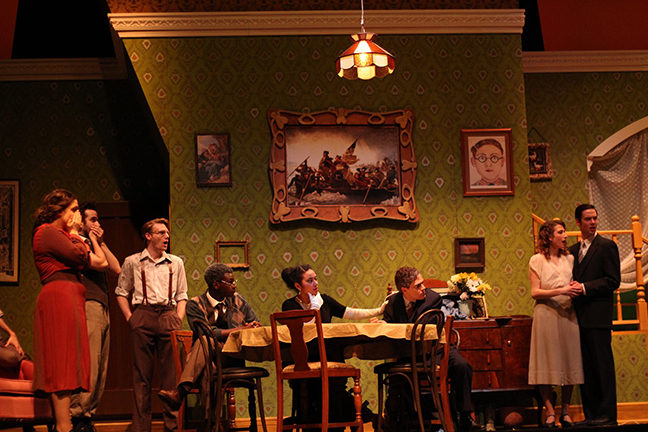 The chemistry between Galway’s and Iannuzziello’s characters was so obvious, it was inspiring. The two are overjoyed by everything that happens to them, despite being unemployed and living with Essie’s parents and grandfather.

The only “normal” member of the household is the second daughter, Alice, who is played by the ever-so-charming Hannah Gordon. She has an office job where she falls in love with the wealthy VP of the company. And you guessed it — the opposing lifestyles of the two families clash resulting in a dramatic love story.

At first, the laissez-faire attitude of the Sycamores is irritating. As an audience member, witnessing their encounters with the law due to their shameless transgression is stressful to watch. In the first act, the family appears to be a bunch of fools who fail to understand how society runs. But by the end of the play, you — the audience — feel like the foolish one for caring so much about something as unimportant as tax returns when all the Sycamores want is to keep their family together. 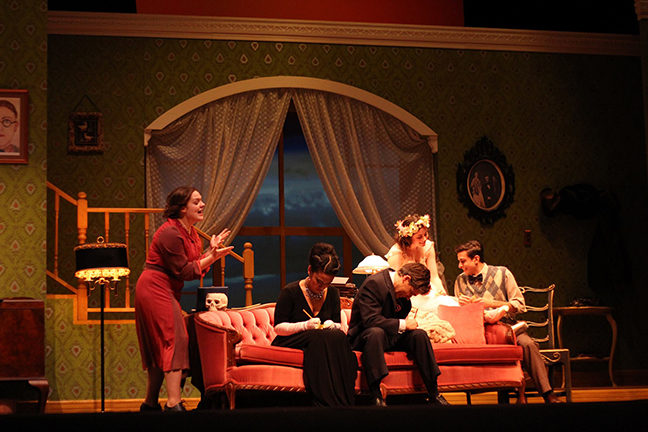 Penny (played by Show 2, Eva Peringer) engaging Mrs. and Mr. Kirby (Jenna Daley and James Gerus) in a game where they have to write down the first thing that comes into their head when she says a funny word. Essie (Show 2, Brooke Morrice) and Ed (Robert Iannuzziello) pictured beside them. (Courtesy: Angela Cabrera)

Director Blair Williams’s message to the audience reads, “I hope this production awakens in you a tenderness and sense of inner freedom the world out there doesn’t often allow you to indulge.”

If you’re looking to indulge in some freedom from the stresses of university, or even an alternative to your typical ‘thirsty Thursdays’ at Grace O’Malley’s, You Can’t Take It With You can offer you some therapy.

The production is split into two casts. The reporter attended opening night, with “Show 1” cast.

‘You Can’t Take It With You’ will run every night this week, until Thursday, Feb. 11, at the Ryerson Theatre on Gerrard Street. Tickets are $15 for students.