Ryerson Rams cricket players Kartik Desai and Jean-Paul Rocke are the 2019 American College Cricket players of the year, the league announced on Sunday.

The Player of the Year awards are given out annually by American College Cricket, the governing body for post-secondary cricket in North America. Recipients are chosen from over 30 colleges and universities and are selected based on players’ on-field performance, leadership and conduct as ambassadors of the game.

“This is a big achievement for both these student athletes and for the cricket club and the university as a whole,” said Zulqarnain Imtiaz, the president of Ryerson’s Cricket Club. “They’re basically our backbone for the team. They don’t only contribute on the field, but they also help off the field by mentoring other players and sharing their knowledge with the whole team, which gives us that competitive edge for the whole team.”

For Rocke, who has played for the Canadian national A team in the past, this is his second straight year receiving the honour. In addition to being a leader on the field, he often volunteers at the Good Food Centre, helping reduce food insecurity in the Ryerson community.

“I’m elated,” Rocke said. “Anytime you get an award like this, it’s an achievement you aspire to get. It’s an honour to always represent your school and have that pride, and I’ll always cherish it.”

“I always believe consistency is key in anything you’re doing,” Rocke said. “Winning awards are really great, but it’s not a focus of mine. My focus is to get back on the national team after this injury and come back and win a title before I finish school.” 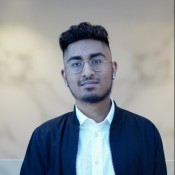