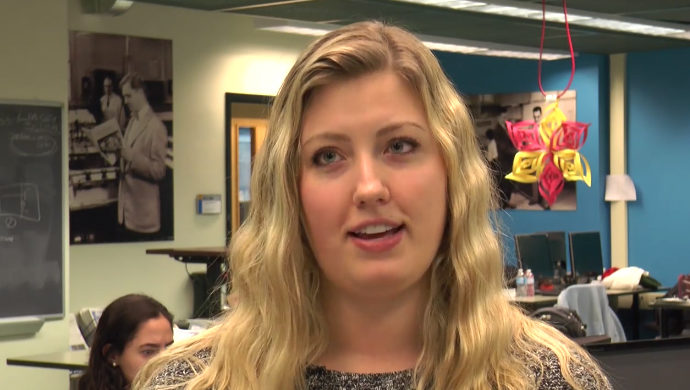 By Emily Stachera and Alexandra Heck

Correction: An earlier version of this story said that Bartlett received rape and death threats after the Canadian Association for Equality (CAFE) published her name and contact information in its newsletter. The Ryersonian found no evidence that CAFE had done so.

Ryerson Students’ Union (RSU) president Andrea Bartlett posted a Medium article Monday night, detailing the negative experiences she had throughout the year, including death and rape threats on what she says are a weekly basis.

Bartlett told The Ryersonian on Monday, that after the Ryerson Men’s Issues Awareness Society was denied club status, she received multiple death threats over the phone.

“Some of them said, ‘I hope you die’ and ‘I hope you’re infertile,'” said Bartlett. She said she received six threats before the winter break. During this time, other RSU members walked her home in the evenings. Bartlett said she thought about filing a human rights complaint through the university but didn’t do so.

“That’s when I realized that this is more complex to pursue,” she said.

Because the threats happened over the phone, Bartlett said, there was no paper trail to follow.

“Thank God none of them were in person,” she said, explaining that many of the threats were online, but the most vicious were over the phone.

Harman Singh, vice-president of student life and events, attended all of the meetings concerning the Men’s Issues Awareness Society’s application for club status with Bartlett and Idrees, but was never subjected to any threats.

Idrees said that Bartlett allegedly received the most volatile threats, after the Canadian Association for Equality (CAFE), a Toronto-based men’s issues awareness charity, published Bartlett’s email and phone number in its newsletter.

However, CAFE executive director Justin Trottier said that no such newsletter exists and that he is appalled by the allegations.

After an investigation, Bartlett gave The Ryersonian screenshots of a Meetup post, which she said was the newsletter in question. The post called for donations, but did not contain Bartlett’s contact information or name.

Calls were allegedly coming from places as far away as New Zealand, Idrees said. In January after MIAS was denied club status, CAFE launched a donation page to raise funds to file a lawsuit against the student union.

Bartlett and Idrees went to Ryerson Security with the problem, who advised them of their Walk Safe Program and they say they stayed on high alert. Both executives gave security copies of threatening emails and posts, but could provide no proof of the phone calls. Idrees said they chose not to go to the police with the issue because the threats appeared to be coming from outside the country.

She urged the incoming candidates to “make educated decisions about the situation at hand.” The situation, she explained in the post, is complicated.

She spoke of “sweetheart” deals made by past members “to get their friends paid,” and even $90,000 worth of allegedly stolen funds. Bartlett alleges that over more than $50,000 in cash was stolen from the student union’s safe and more than $40,000 in credit card theft. Bartlett said she conducted a financial investigation last summer into the missing funds but it was inconclusive.

Due to the lack of security cameras, she said “not much else can be done” about the money, and that it was “written off already in previous year’s audited statements as bad debt.”

RSU offices are now locked throughout the day and security cameras have been installed outside of the RSU office as a result of the thefts and threats Bartlett received.

In the post, Bartlett described the difficulty of balancing her personal feelings with what she feels must be done to keep the union afloat.

Bartlett does not provide details of the threats in her blog post and does not indicate whether she notified the police or Ryerson security.

“The truth is, things were in a greater disarray than I ever could’ve imagined when I started in this role and because of that, tough choices needed to be made,” she said.