Use it or lose it

The construction of Ryerson’s Student Learning Centre is nearing its completion. A curious structure tied to its construction, initially scheduled to be demolished with the SLC’s completion, might receive a reprieve from its death sentence.

The two-storey SLC curtain wall mock-up, erected next to the Architecture Building on Church Street, has served its purpose in testing and fine-tuning the SLC’s final installation details. Designers and construction workers have been using the mockup to test out joint colour and size of the learning centre since it was instated two years ago.

When architecture professor Baruch Zone heard news of the scheduled teardown in the next few months, he decided to challenge his fourth-year design class to turn the temporary mock-up into a permanent structure on campus.

The mock-up cost $250,000 to build and will need another estimated $75,000 to tear it down, according to a project participant.

“If transforming the mock-up into something useful costs less than demolition, then perhaps Ryerson will consider keeping it,” says Zone.

More than 30 models were displayed on Wednesday in the upper atrium of the Architectural Building.

Students came up with a broad spectrum of concepts including turning the mock-up into an herb garden, treehouse, playground, event space, leisure space and an open-air library.

Project participant Chelsea Campbell borrowed the patterned glass design from the SLC in her own model. This formed the essence of her multiple-box concept to be used as the school’s orientation space.

The unique transparent skin of the eight-storey tall SLC is said to create varying light qualities within the interior space.

Designers were permitted to add or subtract from the mock-up model, which served as the base for their concepts.

They were marked on concept and utility and the creation of the model and site plan.

Another participant, Andrew Chiu, wanted to provide a cheap but helpful mock-up alternative to improve the chance of the design being implemented, and formed the Open Air Library concept.

He kept the original mock-up model intact in his redesign, but added a hollow prism structure inserted into the steel frames of the mock-up to be used as bookshelves.

“University is an institution for knowledge,” says Chiu. “Sharing books within the campus community is a great way to utilize the space.”

Zone emailed an invitation to the University Planning Office prior to the project display to view and evaluate the designs.

Dominic Magnone, project coordinator of Capital Projects & Real Estate at Ryerson, says he will possibly take a look at the designs this week and discuss with colleagues what the future holds for the mock-up. 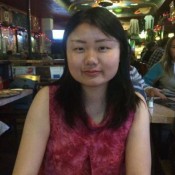 Sissi completed her Masters of Journalism at Ryerson University in 2015.