By: Maggie Macintosh and Kiki Cekota

Cardboard cutouts plastered with packing tape line the apartment’s teal baseboard vents where they meet the dirty linoleum. While they appear to be holding something together, resident Clara Purdy said the cardboard is there to keep something out: unwanted houseguests.

“I don’t like hearing the mice run in the walls,” said the fourth-year Ryerson fashion communications student. “It still bugs me, even after four years.” 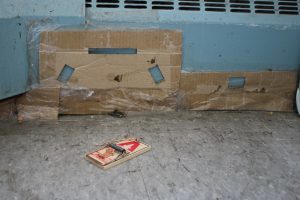 A mousetrap sits in the corner of fashion communications student Clara Purdy’s kitchen in her Neill-Wycik Co-operative College apartment on Sept. 19. (Photo by Maggie Macintosh)

Purdy pays $522 a month, including utilities and internet, for her share of a five-bedroom apartment in Neill-Wycik Co-operative College on Gerrard Street.

The average price of a one-bedroom apartment in Toronto reached $2,000 a month in September, according to data from apartment hunting website Padmapper. The website studied 5,418 of its Toronto listings to collect this month’s data. The listings include both long-term and short-term accommodations like Airbnb.

“I’m not sure how anybody can afford that,” said Charlie Bossy, a Ryerson grad and Toronto resident. Bossy was introduced to Toronto’s rental market when he moved to a cramped apartment from a small town an hour outside Ottawa to study journalism.

Urban planning professor Shelagh McCartney said the study aims to put the housing crisis into context by comparing average rental prices to students’ incomes and the choices they have to make in order to meet rent.

Research has been under way since Ryerson, in collaboration with the University of Toronto, OCAD University, and York University announced the project in late August.

McCartney, who’s also the project lead for Ryerson’s StudentDwellTO chapter, said findings will be used to inform universities on how to address the student housing crisis.

“If people don’t talk to us, then we don’t know exactly what’s happening with students,” McCartney said.

She said student participation in their open focus groups during the next two years will be vital to the study’s success.

Click through this interactive Story Map to find out what Ryerson students are paying for:

The Ryersonian found high rental prices force many students to sacrifice their health and safety if they choose to live in the downtown core.

The mouse problem has persisted despite Purdy’s work order requests and annual moves to new units.

Currently, what Purdy calls home is a corner unit on the third floor that has a kitchen oven with no handle. When she first moved in, she had to teach one of her four roommates how to set up a mousetrap.

According to the Ontario Residential Tenancies Act, residential complexes should be kept “reasonably free of rodents, vermin and insects.” This applies to apartments and co-operatives like Neill-Wycik, but not on-campus residences.

The oven in fashion communications student Clara Purdy’s apartment, pictured on Sept. 19, has no handles. (Photo by Maggie Macintosh)

The act outlines residential landlord and tenant rights and responsibilities. Put simply, Toronto landlords have to equip their properties with adequate heating, lighting and plumbing while tenants must respect the space they’re renting.

Josh Graham, the communications co-ordinator at Neill-Wycik and a resident in the building, said the benefits of not having a landlord mean that residents at the co-op set their own living standards.

The Neill-Wycik resident of four years said the co-operative has used a “spot-treatment” approach to getting rid of pests in the past with the help of Orkin Pest Control. “But that can only go so far if people aren’t cleaning up after themselves,” Graham said.

Graham has never seen any pests in the Neill-Wycik unit he’s lived in for the last four years, but said the building has not been without its share of pest problems. “If you can find a building that’s older than 15 years in downtown Toronto that’s a high rise (and) that doesn’t have mice in it, you’re going to be pretty hard pressed.”

Graham said the co-op has launched a cleaning schedule initiative this year.

Maesha Ahmed, a Ryerson business management grad, said she permanently had the sniffles when she lived in an Annex house slated for demolition in 2015.

“We literally couldn’t even walk downstairs without a jacket on,” said Ahmed, who was one of the handful of Ryerson students and grads interviewed who lived in problematic apartments. “One of my roommates had to sleep in a jacket because her room was downstairs.”

Ahmed missed hours of school and work due to perennial sickness she says was caused by an extension on the house that froze over during winter months.

At the time, she said she and three roommates thought they had scored with rooms costing about $525 a month each, not including utilities, while the landlord was applying for permits to demolish the property.

She said they put up with poor central heating in the winter, no ventilation and what Ahmed believes was black mould in their bathroom at their Lippincott Street home. 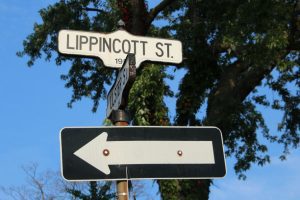 The sun shines on a Lippincott Street sign Sept. 19. (Photo by Maggie Macintosh)

Evan Saskin, one of the three building property owners at the time of Ahmed’s lease, declined to comment on the story. In an email to the Ryersonian, he said, “I don’t tend to manage student properties and therefore won’t have any opinions to share.”

Today, a modern slate and brick building takes up the space where the house once was.

Bossy, the Ryerson student who graduated with a bachelor of journalism in 2016, frequently lived without heat in a Cabbagetown apartment during his second-year lease. He said the apartment was unbearable in the winter when the pipes would often freeze, leaving him and five roommates without hot water.

Bossy paid nearly $800 in total each month to live in a windowless, eight-by-eight-foot room in the six-bedroom apartment. He said the Seaton Street apartment was originally built with only two bedrooms.

Bossy said the Moss Park and Cabbagetown area by Ryerson’s campus, where many students live, is “a particularly rough neighbourhood.”

He once stepped outside his apartment to find paramedics zipping up a body bag on his neighbour’s front lawn.

Bossy said he’s learned a lot since he moved out of his room on Seaton St. “The first warning sign was, in addition to first and last month, the landlord wanted a security deposit — which I know now is illegal.”

Neither Ahmed nor Bossy took action against their landlords or reported their living conditions to the Landlord and Tenant Board of Toronto.

Purdy, the Ryerson student living at Neill-Wycik, doesn’t have to deal with a landlord. Instead, she takes her mice complaints to the co-op’s security desk.

Ahmed said she and her roommates “sucked it up” because they knew it was a temporary living situation. 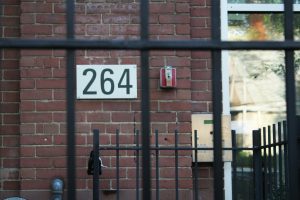 The address number on the Seaton Street building Charlie Bossy lived in during his second year at Ryerson Sept. 19. (Photo by Maggie Macintosh)

One of Bossy’s roommates took legal action, but he never heard anything more about it.

A woman who, since 2009, has lived in the unit adjacent to the property previously rented by Bossy, said she and other professionals living in the building are aware of safety concerns – including heating problems and a lack of permits to build the multiple-dwelling unit.

She said they have contacted the city and brought in fire inspectors, but the landlord is still leasing the cramped apartment to as many as 10 different students now. To her knowledge, no student has ever renewed the lease.

Andy Evans is a landlord who often rents out a house a couple blocks from Ryerson to students. Six tenants live there now.

He described himself as a handy guy who’s constantly upgrading the 160-year-old house on Pembroke Street. 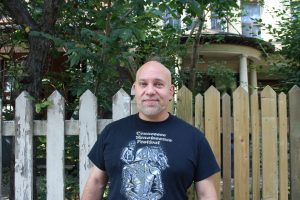 Toronto landlord Andy Evans poses in-between the brand new fence he built outside the home he and six tenants live in and his neighbour’s worn-out fence Sept. 20. (Photo by Maggie Macintosh)

A Toronto building permit sign is taped to his front window.

“As a tenant, you have rights in Toronto,” Evans said. “You have incredible rights.

Allan Macdonald, Ryerson’s director of student health and wellness, said an individual’s physical surroundings and safety have a major impact on their well-being. “We see students all the time where housing is one of the main things contributing to their concerns,” he said, from an oval table in his office at Ryerson’s Centre for Student Development and Counselling.

Fashion student Purdy said other things like school cause more stress in her life than mice living in her walls, but that it’d be nice to have one less thing to worry about.

Bossy said coming home every day to his windowless accommodation had a huge impact on his stress levels.

“That sort of period in my life, that second year, was where my mental health was at its worst.”

If you’re a student tenant, the City of Toronto’s Renting in Toronto page breaks down basic tenant and landlord rights. Students can also access the full Residential Tenancies Act online for free.

Student tenants can file eviction applications and disputes to the Landlord and Tenant Board. Tenants can also file landlord complaints to Ontario’s Rental Housing Enforcement Unit at 416-585- 7214. Property-related issues can be reported to the city by dialing 311 from a Toronto phone or emailing 311@toronto.ca.

If you need someone to talk to about housing and its impact on your well-being, you can contact Ryerson’s Centre for Student Development and Counselling at 416-979-5195.