Teenagers who use electronic cigarettes are more likely to start smoking, a new study suggests.

Released this week by the Canadian Medical Association Journal, the study found a link between vaping and tobacco-smoking. The study reviewed over 44,000 high school students in Ontario and Alberta who used e-cigarettes between 2013 and 2014. Research showed that students were more likely to start smoking tobacco cigarettes within a year of vaping.

Although tobacco cigarettes can only be sold to people over the age of 19, e-cigarettes are a lot more accessible and can be found online or in vape shops.

“Most vape shops don’t ID, so it’s not hard for you to get [e-cigarettes] at a younger age,” Deng said.

Deng added that he was peer pressured by his friends to start using e-cigarettes.

“[Students are] more likely to use e-cigarettes for the buzz that nicotine gives us, not the flavour itself,” Deng said.

Eric Liberda, an associate professor at Ryerson’s School of Occupational and Public Health, said that although e-cigarettes contain a lot less chemicals than tobacco cigarettes, young people are still exposing themselves to carcinogens.

Liberda explained that one of the biggest dangers with e-cigarettes is flavour additives such as diacetyl. Diacetyl is known to give off a caramel or toffee taste. 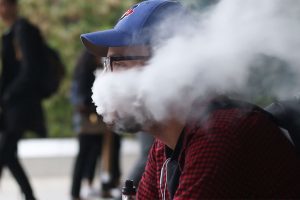 Student sits on the steps of the SLC on Ryerson’s campus to smoke e-cigarettes. (Photo by Natasha Hermann)

Using e-cigarettes has also resulted in health problems like allergic reactions and inflammation in the respiratory system.

Liberda noted that you can’t completely compare the toxicity between e-cigarettes and tobacco cigarettes because it all depends on how much you vape.

“Some reports find that people who vape, vape more than they would smoke cigarettes,” he said.

According to Health Canada, there are no selling restrictions on e-cigarettes that contain no nicotine or make a health claim.

Currently, e-cigarette devices and liquids are not as heavily monitored on quality control, manufacturing or packaging as tobacco cigarettes.

“Part of the regulatory process is trying to figure out how to regulate so many different types of additives,” said Liberda.

But change may be on the way.

There is a new bill that seeks to take control of the e-cigarette business. Bill S-5, which is currently under review by the House of Commons, is planning to regulate sales to minors and limit attractive advertisement, including appealing labels and advertisements.