VOICES: Finding my way out 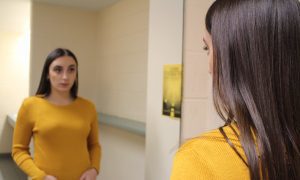 Ryerson student Julia Lloyd reflects on her struggles with her eating disorder. (Photo by Milca Kuflu)

I didn’t realize I had an eating disorder until I noticed myself skipping every meal.

It started the summer going into my second year at Ryerson.

During this time, I also found myself becoming more and more depressed and anxious.

I went days eating only a slice of bread and maybe a few veggies here and there.

I  was working at a restaurant that summer where I was constantly around food.

If I got hungry I would try to eat something light, but as soon as I started to eat I would get a sick feeling in my stomach.

It felt like my body was punishing itself for trying to eat.

Growing up, I never had an issue with my body.

I was always skinny and athletic. But then, in my first year of university, you could say I gained the freshman 20.

My roommate was stunning and I spent that year constantly comparing myself to her.

I felt disgusting, fat and unattractive.

The summer going into second year came along; I started convincing myself that not eating every day could help me lose  weight.

My idea started innocently — I just wanted to lose the weight I gained in first year.

I didn’t even notice my depression and anxiety getting worse because I was high all the time.

I would continue to smoke weed and ignore the fact that I was avoiding meals and hated myself.

When that summer ended, I was moving into a new apartment and didn’t tell my new roommate I was struggling.

Because I was embarrassed. Smoking weed helped me forget about it. And,  during this time, I was high almost every day.

Forgetting I was struggling became easy.

I convinced myself that summer was just a rough patch and the months ahead would get easier — but I was wrong.

My roommate started noticing how much weight I was losing.

At one point, I lost 50 pounds off my weight from first year.

I finally noticed how bad my eating disorder was getting.

But at that time I was way more focused on stopping myself from possible suicide.

I wanted to die during these months in second year.

I didn’t see the point in life anymore. It was a very dark time for me.

It got to the point where my dad would weigh me every time I came home to visit. I would sometimes make a meal just so my parents would believe I was eating.  Then, I would throw it out. Because I couldn’t eat it without barfing it up minutes later.

At one point I was putting a small amount of milk in a cereal bowl and taking a photo of it.

I kept it as proof.

I kept it as proof in case my dad asked if I had eaten breakfast.

Still, it wasn’t foolproof. I still sometimes second-guess if I have an eating disorder.

Society tells us that unless you look deathly skinny that you aren’t suffering from an eating disorder. However, my experience has taught me that eating disorders come in all shapes and sizes.

Some eating disorders are based on restricting, while others are on binging.

There is no structure or box a person suffering can fit into.

It is not just the girl whose ribs you can see that is suffering.

Once I got better medication for my anxiety and depression I thought my eating disorder would disappear.

But I still have anorexia nervosa. It’s the most common eating disorder.

I still struggle to eat three full meals a day.

Most days I can get one meal in or maybe a meal and a snack.

But do not follow my steps. Do not ignore your eating disorder until you can’t ignore it anymore.

And don’t compare your own personal story to mine.

We all suffer differently.

But I believe the only way to work through it is being aware you are not alone.

I had no idea. I’m sorry I didn’t do anything when I saw you struggling. We all love you very much and I will stand taller now that I know.

You mean the world to us!