I stand in line at Starbucks, along with four other people, who will soon pay for an $8 coffee.

In 15 minutes I’ll be on the other side of this same counter, so I am  grinning at my busy co-workers.

Almost everyone here is about my age. Most of us pay our own rent, spend any free time on homework and we all go to post-secondary schools.

We’re trying to learn some things that will help us get out of our barista careers.

I never used to think about work outside of my part-time job.

It’s always been a paycheque to keep my life going smoothly.

It allows me to play catch-up on my social life.

Once I graduate I’ll wave my $40,000 degree in my hand and find some career I’ll enjoy, I’d tell myself.

Getting even that far has been tough.

Even finding an internship was difficult, and I had trouble finding someone who would literally let me work for free.

After four months of unpaid interning over the summer, bringing forth a caffeine addiction, insomnia and anxiety, I decided to try to find a few paid freelance jobs. 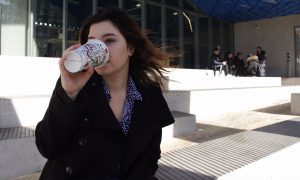 At 16 years old, Natasha Hermann was working and living away from home. (Photo by Milca Kuflu)

I’m not entirely sure of what I want to do when I graduate.

All I know is that I can use a camera, I enjoy editing video footage, and I’m great at bullshitting my way through interviews.

My first freelance attempt a few months back combined all three.

It was a job for the International Indian Film Festival. I had to create posters, brochures and film a few events for the festival. The pay was $3,000.

The supervisor asked all the candidates to create a template. He would then determine who would be the best employee.

I had an idea of what I wanted to create, but using InDesign or Illustrator is some form of magic I’ll never understand.

I have a newly formed and profound respect for graphic designers.

I was working on the project for almost a week and my head was exploding.

My supervisor tried to keep me on the project but we both knew the design was terrible.

In the end, he hired someone else but offered me an internship. Unpaid.

I  had  come full circle.

A part of me knew it would be good for my portfolio, but I politely declined.

I was unable to get the time I needed off work and, on top of that, I was  frustrated by the whole I-need-money-to-survive ordeal.

There was a time, for about a month, I would apply to to jobs every time I came home after a long shift.

It’s not that I entirely hate being a barista.

It’s that, almost fours years of practising a trade should result in a niche career.

I’ll be honest, more than half of my income is put towards the necessities like rent, food and internet.

I’ve been working and living away from home since I was 16 years old.

I’ve always had enough in my bank account to survive.

But it also hurts cancelling plans with friends who can easily spend $100 at a bar.

I live with three other roommates.

Two of them don’t pay for things out of their own pockets.

And they don’t come home late from work wondering if homework is a priority over sleep.

They don’t know what it’s really like to feel the effects of living on the poverty line, with 4.8 million other Canadians (2016 census).

I’m not upset at those who have a decent income. I’m just frustrated about how the system works.

I’m obviously not the only one. It’s not rare that students refuse to call into work even though they’re sick, or miss the deadline of an assignment because there simply isn’t enough time.

My advice: we cannot stress out about the things we cannot control.

Long hours can result in a great work ethic, which is something you cannot teach.

Every unpaid opportunity is an experience, but take time for yourself and know your worth.

And just keep in mind, some baristas do question why you’re spending $8 on a coffee.