Travelling with her nine-month old baby, she moved from Istanbul to Germany — a country she had never been to — to build a better life. She had grown up in Eastern Turkey, then moved to Istanbul as a young teen. Today, she lives in Munich, travels to a new country several times a year, and spends her Sundays going to the movies with her friends after church. This Sunday, she saw Black Panther (and is a big fan of the movie now). However, getting to this point was a 35-year journey.

My grandmother, Azniv Bedoian, immigrated to Germany in 1965 after her husband had been living there for a few months. Four years prior to her move, there was a demand in Germany for labour in manufacturing due to the country’s booming post-war economy. According to German broadcaster Deutsche Welle, Turkey was willing to help Germany recruit potential employees, focusing on Turkish men. My grandmother, an Armenian woman, did not fit the bill at all, but did what she needed to do to help herself, her family and her future.

She started working in clothing alterations and, after six months, moved onto working for Bosch on a manufacturing line. Of all the employees working in the factory, 50 were men and only three were women: one woman from Yugoslavia, one of my grandmother’s friends and my grandmother. For the next 33 years, she spent countless hours in a welding factory, all while raising her daughter, my mother.

“You know when somebody is very eager, wants to learn something new all the time, and never gives up? That’s my mother,” says my mother, Yercanik Tascioglu. “She won’t say no to anything and wants to prove herself to the world.”

Even after giving birth to two sons, it never slowed down her hustle. Her days revolved around her children first, her work second, and then herself. She kept building her family and expanding her skill set, with a dream in mind of what their lives could be as long as she kept going. There was never a dull moment in her household.

While talking to my grandmother over Facebook video chat, she told me that she never once went to school growing up. It was only at the age of 15 when she started to learn how to read and write in Turkish. At 30 years old, after her move to Germany, she told herself she would have to learn German and did so by attending night school. Years later, she went to Venice for a month to learn Armenian, then an English school to learn English, while spending months in between living in Southern Italy practicing Italian. Her collection of languages is not perfect, but it’s just enough for her to get by.

“I can live only with my language,” says my grandmother. “Wherever I go, I don’t need anything else.” Meanwhile, I’m here struggling to learn another language on Duolingo.

My grandmother pushed the societal gender norms of her time. She could have just remained the caregiver of the family while her husband worked, but she didn’t. She broke society’s “rules” of what defined a woman through her eager attitude, her drive to change the direction of her life, and embark on an unknown and unexpected journey. Even after her retirement she started a side hustle, working part-time for her friend’s clothing company.

She stood tall through it all and is now living a life better than she could have ever imagined. And as the quote by R.S. Grey goes, “She believed she could, so she did.”

Hearing her story encourages and inspires me to continue the fight for gender equality that she has been taking on since the mid-1900s, to continue working toward the life I dream of for my future, and hopefully, pick up another language.

This International Women’s Day, and every day, I am proud to celebrate my grandmother and women around the world who push the boundaries for themselves and every other woman in their lives. 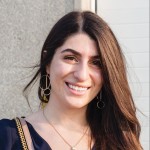