After a year-long delay, renovations that violated building codes and thousands of dollars paid by the Ryerson Students’ Union (RSU), a mental health support centre will finally open next semester.

Former RSU president, Obaid Ullah, said that the current administration is accusing the previous one of fumbling with the renovations for political reasons.

He said the code violations were due to the work not being completed, as he and former vice-president of student life, Harman Singh chose to pause the renovations in order to pay back students for the 6Fest debacle. 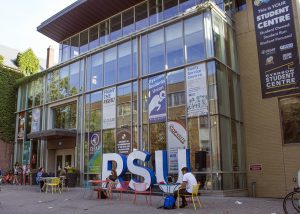 The wellness centre has been held up for a year but will be operational in the basement of the SCC in January, said RSU president Susanne Nyaga. (Photo by Aidan Macnab)

Last year’s RSU decided to turn the space that was formerly a used book room into a student wellness centre. The location for the new centre is the basement of the Student Campus Centre. But a year has passed and while  the used book room has found a new home online, the physical space remains empty.

Singh was in charge of the renovations. The contract was given to Onta-Reno Construction Ltd., which was paid $19,000 out of the budget for its work. After this shoddy work was completed, the site had to be assessed for building, safety and fire code violations. In July, the RSU approved new renovations for another $18,000.

“What happened last year was folks did renovations, but they weren’t up to code, so we had to spend a lot of time over the summer doing the actual layout, getting architects to come in, getting actual licensed people to check out the space,” said RSU president Susanne Nyaga.

Nyaga said the space is now fully renovated and ready for the centre and that she will work with vice-president of equity, Camryn Harlick, to develop programming before it opens.

“There were some finishing touches that needed to be made and at the time the whole board was really focused on refunds because the refunds issue was a university campus issue at the time,” Obaid said.

He said they were told that they did not have to get Ryerson facility and property management involved when they began the renovations, because of the nature of the work.

“There was no structural change, it was a facelift,” he said.

Singh said via Facebook Messenger that they did not need to check the renovations with Ryerson facility and property management because they were not removing beams, altering weight distribution or the electrical or plumbing systems.

“Since that room was under the Ryerson student centre and there were no structural changes, we were allowed to make those changes,” he said.

The RSU approved the new renovations to fix problems with the electrical system, including sockets and light fixtures that had been damaged or covered up, and to install cover plates. Four doors and frames were replaced and the room was painted, according to a quote from Lewis Selva of Limited Building solutions.

According to Daniel Lis, vice-president of education, the main problem hindering the renovations was that the repairs were done for doors and hardware. Electrical fixtures needed replacing or fixing and there were some design fixes and paintwork still to be done.

Lis said that when the motion to redo the renovations came up, it was passed without much discussion. The RSU’s general manager and wellness centre co-ordinator, Sid Naidu, presented their plans along with feedback from building inspectors.

“They need to make sure it’s up to code, and so this was straight from the building inspectors that they needed to see in the room in order for it to be considered valid and operational,” Lis said. “They had gone about getting quotes from businesses.”