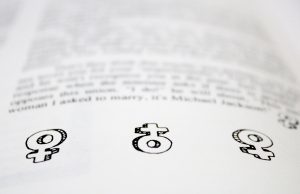 Illustrations in the first issue of Ryerson’s feminist magazine, a publication that has been renamed twice this semester. (Photo by Maggie Macintosh)

The magazine, created in 1992, has been published out of Ryerson University under the name McClung’s magazine for decades.

Last month, the editorial team behind the magazine changed the name to Minowe Magazine so the publication wouldn’t be affiliated with Nellie McClung, a suffragette who supported eugenics—the controlled breeding of humans with desirable traits to create a “supreme human race.”

After the editorial team first renamed the magazine to Minowe Magazine, the Indigenous Students’ Association (ISA) at Ryerson voted to call the naming an act of cultural appropriation.

“Minowe” is an Ojibwa word for a person who has a good voice and speaks well, according to the Ojibwe People’s Dictionary. 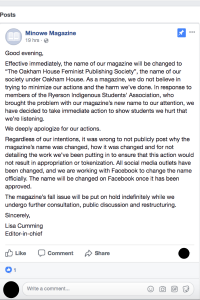 Screenshot of the magazine’s latest statement.

“In response to members of the (ISA), who brought the problem with our magazine’s new name to our attention, we have decided to take immediate action to show students we hurt that we’re listening,” she said. “We deeply apologize for our actions.”

The publication’s social media channels have been renamed and their Facebook page will be changed once Facebook approves their request.

The ISA has yet to release a statement on the matter.

“I support the new name and I’m so happy that they were able to come up with such a logical solution in such a timely manner,” said Sarah Dennis-Kooji, a student on the ISA who was originally hired by the magazine in September to consult on name ideas.

“I wish them all the best in truly upholding intersectional feminist theory,” she said.

The Oakham House Feminist Publishing Society’s current issue is being put on hold until the magazine undergoes consultation, public discussion and restructuring.

The publication put out a call for two new editors-in-chief and a managing editor for next semester. The applications were due Dec. 3.