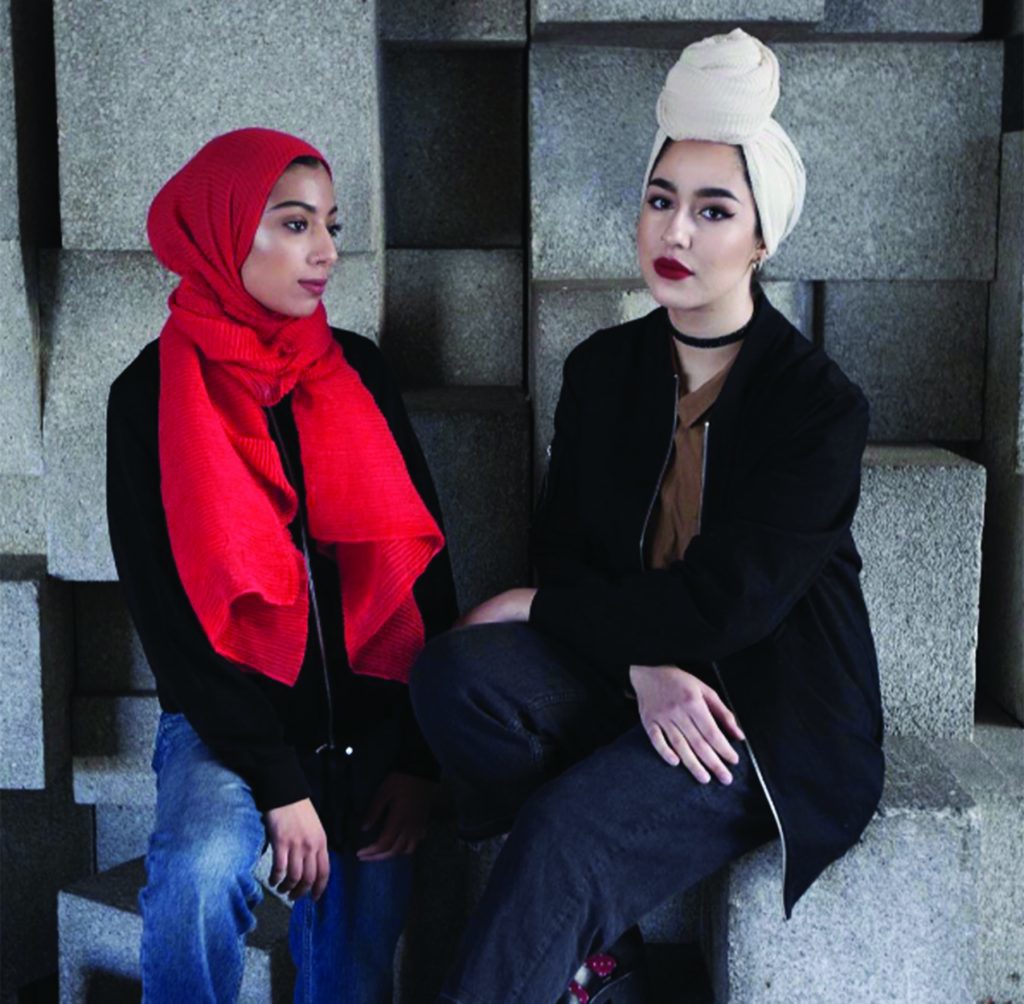 These are just a few of the words the audience offered when confronted with the question, “What first comes to mind when you hear the word hijab?”

At the front of a large lecture hall in Ryerson University stand Hüda Doulah and Haleema Mustafa, the two young Muslim fashion vloggers who posed the question.

“Do you see her scarf? I love that colour,” whispered a young blonde woman in the audience, pointing to the deep emerald green scarf covering Doulah’s hair. “I know, it’s so pretty,” responded her friend.

Their exchange is pleasant and while it offers a momentary break from a world that, at times, can seem culturally divisive, it also comes only moments after the word “assault” was associated with the idea of that very scarf.

Doulah and Mustafa visited Ryerson University on March 14 to speak to professor Ben Barry’s fashion studies class on modesty fashion, the stereotypes surrounding the hijab and the difference between cultural appreciation and appropriation.

It is these contrasting viewpoints and divisions that Doulah and Mustafa hope to break down through education and open discussion.

“With what’s going on in the world with world politics and Trump, it’s very hard to change peoples’ mindsets but what we can do is raise awareness and talk to people. That’s where we have to start,” said Doulah.

Inspired by other Muslim fashion bloggers such as Dina Tokyo, the pair decided to share their unique point of view and began to blog their fashion in June 2016 through Instagram and YouTube under the handle “Yung Samosas.” 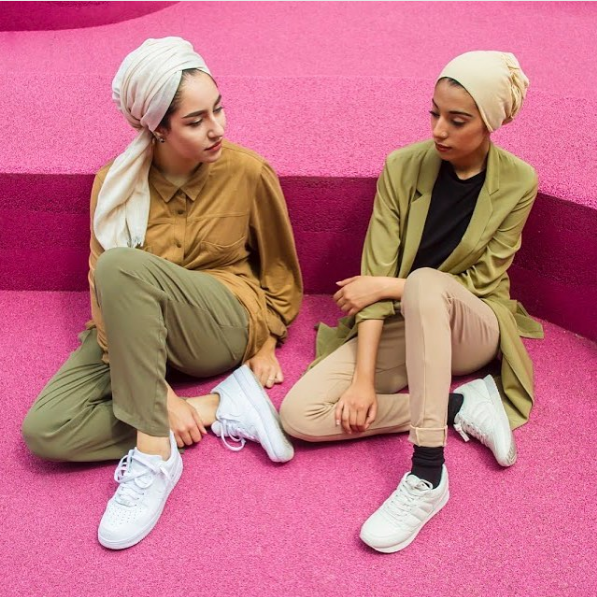 “We love samosas, and we added ‘Yung’ for street cred,” joked Mustafa, earning a laugh from the audience.

Their platform is a way for the pair to show young women that modesty and fashion can intersect and that they can still be creative and stylish without sacrificing their faith.

After only one month as the Yung Samosas, the duo received attention from the CBC, which was interested in shooting a feature video on modesty fashion in Toronto.

“We were in our own bubble, just having fun sharing our fashion, we were excited. It seemed harmless,” said Mustafa.

However, shortly after the video was shared on CBC’s Facebook page, the comment section quickly burst that bubble. While there were a number of comments from non-Muslims denouncing the wearing of the hijab, what shocked the two women the most was the backlash they received from their own Muslim community for their “portrayal” of the hijab.

“That was a big shock to me, I thought we were all in this together kind of thing,” said Doulah. Standing beside her, Mustafa could only shake her head when recalling the memory.

While Mustafa’s parents support her in all her endeavours, they were concerned for her well-being after reading the comments and suggested she stop putting herself on social media. Although Mustafa understood her parents’ point, she decided to turn the negativity into determination instead.

“I had it set in my mind that I’m not going to let these people stop me, I’m going to address these comments,” said Mustafa. “Fear and hate is built off of ignorance and people just need to be educated.”

Growing up in a predominantly white and Asian neighbourhood in Markham, Ont., Mustafa has a history of turning the negative into a positive.

As one of only two girls who wore the hijab in her school as a child, Mustafa was often judged on her choice of clothing. She would wear jeans and sweaters, while the other girl would wear more loose fitting clothing.

“People would ask me, ‘Why does she dress that way and you dress this way? Is she a better Muslim than you?’ and I would say, ‘No, this is just the way I want to dress,’” said Mustafa.

She credits that experience to giving her the confidence to stick up for herself and to speak to the world on her fashion choices. Modesty is not synonymous with being unfashionable.

Unlike Mustafa, Doulah’s appearance was never questioned as a child. “Where I grew up, it was a very small town and everyone looked the same,” said Doulah.

Doulah grew up in a town next to the sea in the city of Mersin, Turkey. Friday nights were spent at prayer and Sundays were spent at classes learning to read the Qur’an to understand her religion. When she was seven years old, her family made the move to Canada.

“The one thing that really shocked me coming to Canada was seeing people who were of different cultures, and different skin colours,” said Doulah. “I’m still amazed at how diverse Toronto is, I just love it here.”

After the move, Doulah remembers being fascinated by the other women in the mosque wearing the hijab, which inspired her to wear it. 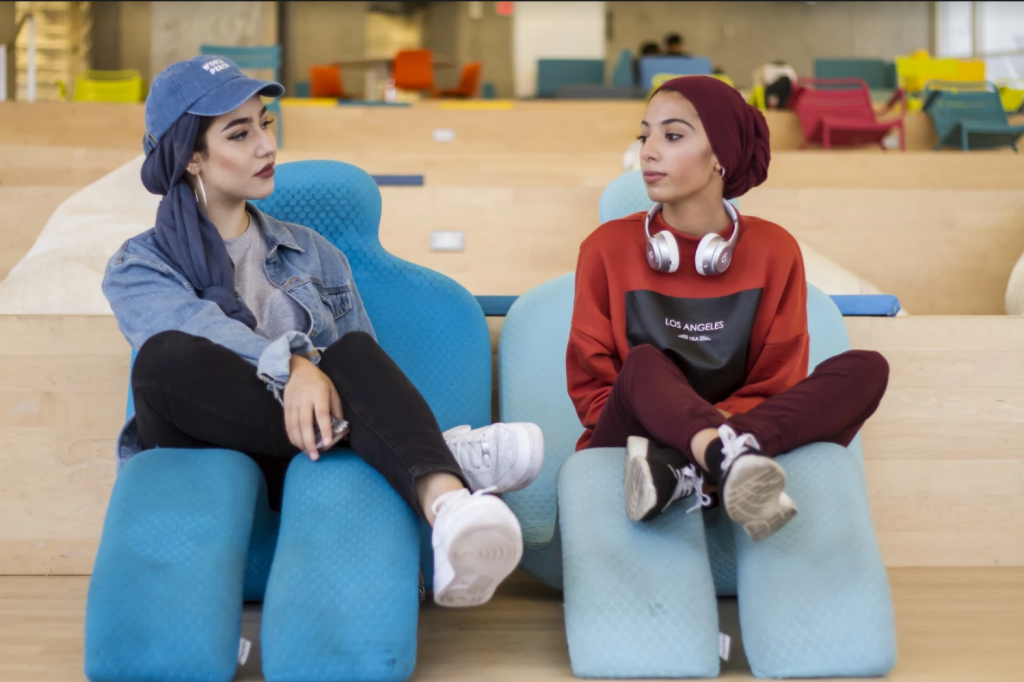 “My mother does not wear it,” said Doulah, pointing to the green scarf tied around her head. “It wasn’t forced upon me or anything. It was more like if you feel like it comes from your heart, then you can do so.”

By the age of 13, she was committed to wearing it daily. “I love everything about it,” said Doulah.

Both of their gazes drifted to the right where a young woman in the third row raised her hand to share a story of her own. Sahar Taha, 18, said the speakers’ stories resonate on a more personal level.

Born and raised in Canada, Taha, a fashion communication student at Ryerson, made the choice to wear the hijab only recently during a trip to Sudan last summer.

Taha spent a lot of time around her cousins during the trip, who all wear the hijab. “I could see how confident they were in it,” recalled Taha.

Since wearing the hijab, Taha said she feels more like herself and is proud to be identified as a Muslim woman first before anything else.

“The biggest thing for me is wherever I go, if I walk into a room or if I walk down the street, people will see my faith and what I believe in before they see anything else,” said Taha.

Although the experience has been predominantly positive, Taha is not immune to the same judgment from within the Muslim community that Doulah and Mustafa have faced.

“I actually receive hate from Muslims. They tell me that I’m wearing it wrong, or that I’m showing my hair,” said Taha. “They just try to police the hijab, and it shouldn’t be that way.”

Similar to Mustafa, Taha has let the negativity fuel her strength to persevere in the face of adversity.

“When Trump started the whole Muslim ban and there was so much hate towards Muslims, I just felt powerful that I have the strength to wear this,” said Taha. “Knowing that in our day and age it’s really hard to be a Muslim made me feel like there’s a lot of strength inside of me, to be able to keep going.” 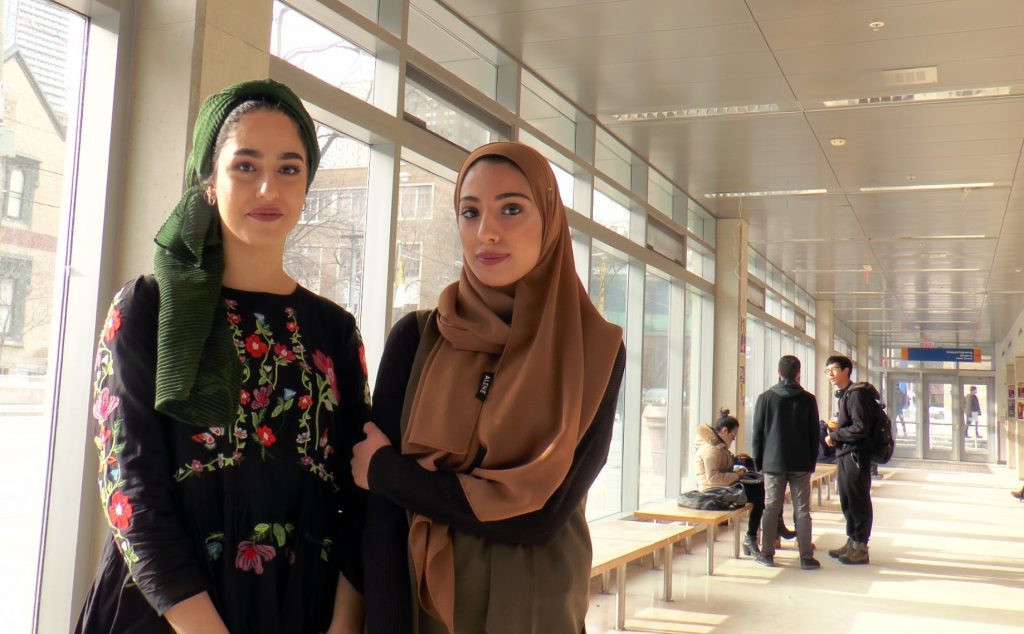 Mustafa and Doulah could only smile while Taha shared her story. What all three women said they want society to better understand is the difference between culture and religion.

The association Western society makes between the practices of Islam and the violence or oppression of women is not a new concept. However, it is a misinformed one.

The choice to showcase modesty fashion through the wearing of loose-fitting clothing or the hijab, the niqab or the burka is often seen and understood by Western society as something “archaic” – nothing more than a way for men to control women. However, for many women wearing the garb, this could not be further from the truth.

“People often mistake cultural practices in Islamic countries as something that is religious. It is very important to separate the hijab from the violence … that is often associated with its enforcement in certain Muslim societies,” said Mustafa.

While Mustafa acknowledges and encourages people to recognize that there is truth to the notion that some women in certain Arab countries are forced to wear the hijab, she emphasizes that it is important to consider that it is the culture of these countries, not the religion itself, that is at fault.

For both girls, the hijab represents a relationship between a woman and God, it does not stand to oppress women, but rather empower them.

As they concluded their presentation, the room filled with applause.

If Doulah and Mustafa are proof of anything, it’s that perseverance is the best medicine and religion does not limit self-expression.