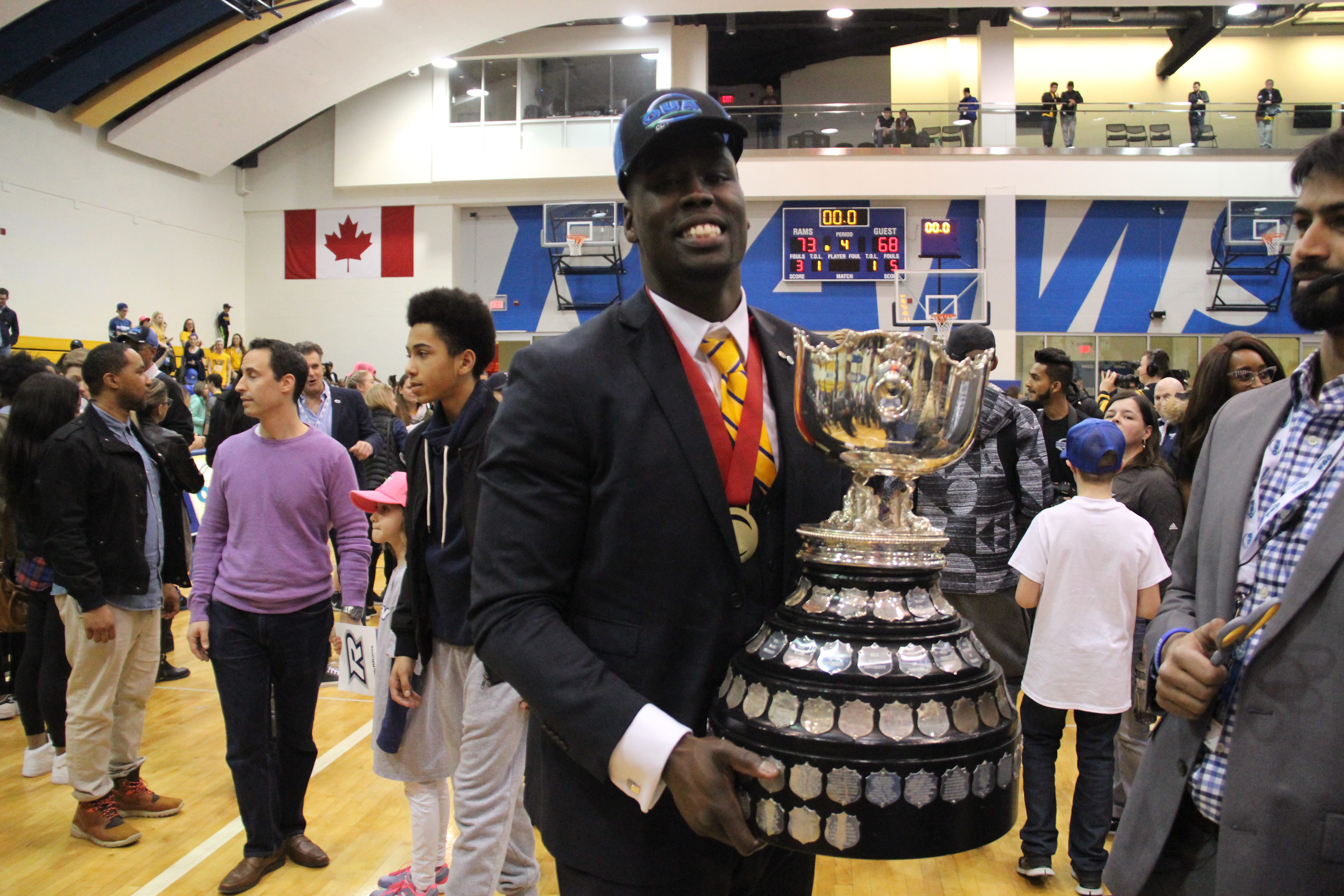 The Ryerson University basketball program finished the 2015-16 season with both teams on the podium at the Arcelor Mittal Dofasco CIS Final 8 tournament.

The women’s team won silver for the first time in program history, while the men’s team finished with their second straight bronze medal.

The tournament marked the end of a significant five-year period for Ryerson basketball, with co-captain Aaron Best of the men’s team, and co-captains Pingue-Giles and Silvana Jez of the woman’s team suiting up for a final time in a Rams uniform.

In their five years, the Ryerson basketball program has appeared in five CIS Final 8 tournaments, and combined for six seasons where they’ve won more than half of their games.

That’s a drastic difference from just one national tournament appearance and nine winning records in the 30 years prior to the 2011-12 season.

The Ryersonian revisits Ryerson basketball’s big moments according to coaches and players.

The Ryerson men’s basketball team started in 1949, but it was coach Terry Haggerty that launched the program off the ground floor.

In 1981, Haggerty took control of a men’s basketball team that had gone 2-46 in their previous four seasons. He transformed it into a reputable basketball program.

In his first season, the men’s team finished 0-12, but that didn’t stop Haggerty from pursuing a 22-year career as the head coach.

Haggerty guided the Rams to a 7-7 record in his fourth year as coach. Despite that success, winning didn’t become a regularity for the Rams until the mid 1990s. From 1993-94 to Haggerty’s last year in 2002-03, the team had only one season with more losses than wins.

“You’ll always remember the fun,” said Brian Smith, the 1998-99 Ryerson Male Athlete of the Year during the Haggerty years. “Through it all with the winning and losing, it was fun because you had a group of guys that you got along with.”

The following year, coach Haggerty won the Ontario University Athletics (OUA) Coach of the Year after finishing with a record of 17-3, which was then the best regular season record in school history.

After Haggerty left in 2003, the men’s team hired Patrick Williams. In the two-year period that he served as head coach, the Rams had a 1-43 record. He was replaced with Glenn Taylor, who only guided the Rams to a winning season in his fourth and final year as the head coach.

The Rams’ next hire was Roy Rana, a name that will be familiar to most who have been following the team’s progress. He started in the 2009-10 season and is the current coach as well as the U18/19 Men’s National Team.

Between coach Taylor’s tenure and coach Rana’s first year, Ryerson students were able to witness the 2,068 points Boris Bakovic scored in a Rams uniform, which still stands as a school record. 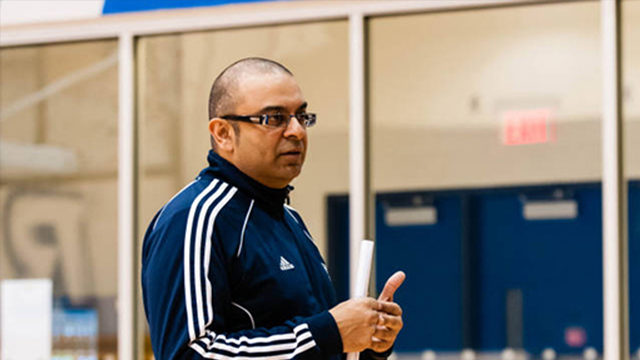 With Bakovic leaving the following year, after a 10-12 season, coach Rana recruited players who helped fuel the success of Ryerson basketball, both on and off the court.

One of those players is Jahmal Jones, who was part of the Rams for five seasons starting in 2010-11, and is now playing professional basketball in the Czech Republic.

“We all knew that our togetherness, our comradery, and family-like approach would be the staple of our basketball program and team,” said Jones, the 2014-15 Ryerson Male Athlete of the Year. “To this day the alumni guys that I played with, we’re still close, we still play with each other during the off-season.”

Together with coach Rana, Jones helped improve Ryerson’s record almost every year, while making two appearances (2011-12 and 2014-15) to the CIS Final 8 tournament.

The 2014-15 season was historic in the sense that the Rams set their best season record in franchise history of 17-2, and followed it up by winning the bronze medal at nationals. 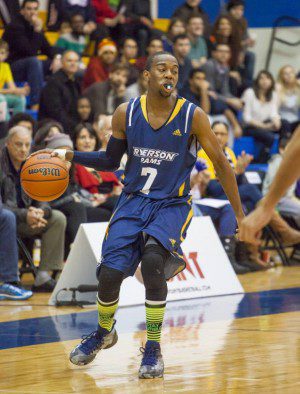 This year, the Rams have the same mentality and desire to win even without Jones and coach Rana, who took time off to be with his family during the 2015-16 season.

Patrick Tatham, spent five years as an assistant coach for the Rams before taking the interim position during Rana’s sabbatical.

With a group of veteran players, the Rams tied their franchise record of 17-2 and earned the first seed for the first time at the CIS Final 8 tournament.

“We got the bronze last year, but I don’t think anybody on the team, whether new or old, wants another bronze medal or silver medal,” said Tatham. “They want gold again, they know the feeling that it feels like to have gold after Saturday, so I think everybody is kind of just dialed in and ready to go.”

The success helped coach Tatham win both the CIS and OUA Coach of the Year award, an example of being “uncommon” – a word he’s used to describe the challenges they faced from the first day of training camp to winning the Wilson Cup on March 12.

The Ryerson’s women’s basketball team started in 1951, but didn’t form a true identity until Sandy Pothier became the head coach in 1992-93.

Before coach Pothier’s arrival to the Ryerson women’s basketball program, no coach had kept the job for more than four consecutive years. Their playoff experience was also minimal, with only four trips to the postseason.

Pothier guided the Rams to eight playoff appearances in the 18 seasons she served as head coach. Her first one was in 1997-98, marking the end of a 10-year drought and the start of a rich tradition of women’s basketball.

Throughout her time, Pothier coached some of the best basketball players Ryerson has seen, including the all-time women’s leading scorer Ashley MacDonald.

“It was a culture; you had to give 100 per cent every practice. Right off the bat it was going to be tough, but it was going to be rewarding,” said MacDonald, a two-time Ryerson Female Athlete of the Year recipient. “I remember when I first got there, she showed me around the campus, and brought us out and we did a workout and everything, it was awesome. I was sold right there.”

Unfortunately, it was Pothier’s last season with the team. She was diagnosed with cancer and died on Jan. 21, 2012, aged 50.

“She guided me through a lot of things that were new to me at the university, she was a special woman who I obviously connected to and respected tremendously,” said coach Rana. “It was sad for all of us, it was sad for us as a community and as a program to see her pass. But her legacy lives on.” 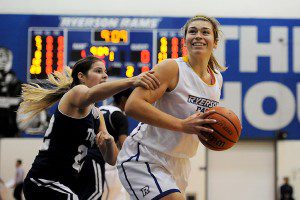 Assistant coach Charles Kissi filled her position as interim head coach for a year, and served one more year as the official head coach. For those two years the Rams didn’t have winning seasons, but still made the playoffs.

“I know that a lot of the girls loved playing with him,” said Dayana Gechkova, who’s played for all three of the most recent Ryerson women’s basketball coaches. “I’m still in contact with him, it’s amazing … we used to go extremely hard at practice, and I felt that I was in the best shape of my life.”

The next and current coach, starting in the 2012-13 season, was Carly Clarke. She finished fifth in the CIS Final 8 tournament as a player for the Bishop’s Gaiters in 2004.

Clarke had competed in multiple international competitions as a coach. A highlight was a silver medal as the head coach for team Canada at the FIBA Americas U16 Championship for Women.

Clarke has guided the Rams to the playoffs each year, but last year’s 16-3 record marked her first winning season. The Rams also made it to the CIS Final 8 tournament for the first time, finishing sixth.

“We gained some good experience with some younger players and built our culture of excellence, and what’s expected in order to achieve excellence,” said Clarke. “Last year, those things combined with some strong recruits, we were able to put the pieces together culturally and with our talent.” 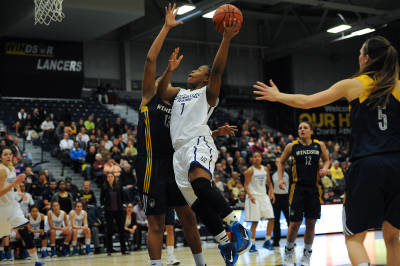 Clarke credits the university’s academic reputation and support from the athletic department for attracting student athletes to Ryerson. She said the Mattamy Athletic Centre, located inside the former Maple Leaf Gardens, has also helped. The Rams hosted both the men’s and the women’s CIS Final 8 in the facility last year.

Currently on a 12-game winning streak leading into the CIS Final 8 tournament, Clarke said that the Rams are motivated to compete at a high level.

“This is our last year, so we have this sense of fire underneath us knowing that we’ll never get this opportunity again,” said Pingue-Giles, about her leadership role on the team. “We’re just making sure that we can rally all the girls behind us, bring a lot of competition to the game, physicality, and a sense of urgency.”