Rachel Surman is the news editor at The Ryersonian. (Photo by Dasha Zolota / Ryersonian Staff)

My name is Rachel Surman. And according to society, I’m a basic bitch.

It’s only recently that I’ve come to this startling conclusion.
I’ve never considered dog photos, smiling selfies, skinny chai tea lattes, and appreciation of top 40 tunes as a pattern that could be equated to basic bitch status.

But a few nights ago, over drinks with my roommates, I listened to them tease me about how I’ve never listened to Pink Floyd (ever). I also, reasonably, was opposed to hanging a portrait of a naked woman as “art” in our living room.

So if you want to call me basic, then that’s fine. I’ll continue doing what makes me happy — and I encourage you to do the same.

I’ve never appreciated classic rock, but it’s never been a problem until now. I unabashedly listen to Lana Del Rey club mixes while running, and endless verses of Beyoncé featuring Nicki Minaj get me through articles and essays.

I watch The Mindy Project. Religiously.

I overuse the salsa-dancing lady and monkey-covering-eyes Emoji when texting just about everyone.

And on Instagram, I often have trouble picking between Valencia and X Pro filters – I want to look tanned.

But at least I can admit these things with no shame — because these so-called basic tendencies make me happy.

As long as I’m happy and enjoying life, in the words of Demi Lovato, “I really don’t care.”

I may be basic, but I’m also an ambitious journalist, feminist, die-hard Olivia Chow supporter (who shed a tear when she lost the 2014 mayoral election), and I’m a true lover of various types of music.

A close friend of mine, Kristy, brought up the basic bitch phenomenon over our favourite caffeinated Starbucks drinks. “There’s no such thing as a basic bitch,” she said.

“Everyone is an individual and I’m just so sick of hearing the term.”

“It’s offensive. It’s a derogatory term used as a put-down that was appropriated by women and is an expression of sexual inequality,” she said.

The first time I heard the word basic used in this context was in rapper Kreayshawn’s 2011 hit Gucci Gucci, where she raps, “basic bitches wear that shit so I don’t even bother.”

Fast forward three years, and the term is thrown around so loosely that I hear it regularly on campus. Rapper T.I. sings about these supposedly mediocre women, reinforcing the message that women are inferior.

I even got the comment “basic” on an Instagram photo of myself in my hastily put-together cat Halloween costume. Well, joke’s on them — it was cost-effective and hella adorable.

I previously thought that if women embraced the term “basic” and appropriated it into a positive trait, then all would be well. But Golden says that isn’t the case.

“There’s nothing positive about being called a basic bitch. It’s negative and goes beyond the word bitch. Why are women being called dogs in heat?”

Golden also says women need to band together and support one another, instead of internalizing hate and putting each other down.

So if you want to call me basic, then that’s fine. I’ll continue doing what makes me happy — and I encourage you to do the same. Excuse me while I go enjoy my skinny chai tea latte. 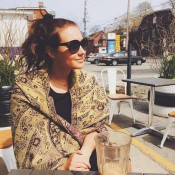