Behind the lens but on the front lines of the action, Ryerson student Winston Chow knows how to snap sports shots better than most on campus. But Chow, now a seasoned photographer, didn’t end up behind the camera on purpose.

“It was an accident, a serious accident,” says Chow, who was first handed a camera during his 2008 frosh week.

That fall, Chow began Ryerson as a computer science major, then moved over to the Ted Rogers school of management where he studied IT management. But it didn’t take him long to realize information technology wasn’t his calling.

Last year, Chow took the lead as Ryerson athletics’ photographer. He first applied for the position in 2009, but didn’t get it.

“I made a bit of a stronger second impression than I did the first time,” says Chow, who eventually got the position with the help of his friend Andrea Crofts.
Crofts, who worked as a graphic designer at Ryerson athletics, told him to approach Jim McLarty, Ryerson’s sports information co-ordinator, about the position.

Things started to fall into place last fall when he volunteered to shoot the Ryerson Rams and Tulsa Golden Hurricanes basketball game.
For Chow, the toughest sport to shoot is badminton.

“It’s because the human body is so involved in that, there is a lot of snap motions,” he says. “In technical terms, you have to shoot at a very high speed to capture the moments.”

However Chow admits that it’s still not fast enough to capture the movement of the shuttlecock (also known as the birdie) that is used in badminton. “It’s also the fact they play in Kerr Hall,” he says. “It’s terrible lighting in there.”

Basketball, he says, is the easiest. “Missing a basket in basketball is not as bad as missing a goal in soccer or a goal in hockey.”

On the topic of getting the perfect shot, Chow’s opinion is split. “You either want to capture sort of the holistic view, but as a sports photographer you need to get the shot that goes on the website, that goes on the cover (of) something.”

Working as the digital intern for the Canadian Olympic Committee (COC) has also given Chow a different perspective on shooting sports. The manager at the COC told Chow to always realize there is more going on than just the action.

“You have to be really aware of the political nature of your images,” Chow said. If the client is Adidas, he has to make sure that the shot doesn’t include a Nike swoosh somewhere in the background.

“Jahmal Jones actually landed on me once,” says Chow. Both the camera and Chow made it through the game.

When he is not capturing photos courtside, Chow travels with the various Rams sports teams when they play games off -campus.
Most recently, he travelled to Kingston with the men’s and women’s soccer teams. “It was nice to get to see the teams in sort of a different perspective and, pardon the pun, a different lens,” he said.

Getting to know the players off the field is something Chow values.

“You realize there is more to them when you travel with them, when you actually sit down and have a conversation and spend time with them.”

For Chow, it challenges the notion that all athletes do is compete.

After several years and thousands of photos, Chow admits that if people were to ask him about his sports photography portfolio, two-thirds of it wouldn’t be sports action on the field of play.

“It would be stuff on the bench, like a coaching session, a team huddle.” 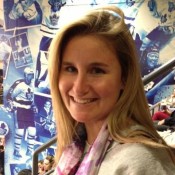 Originally from the West Indies, Hayley loves everything to do with sports. Equestrian turned journalism student, she needs to know what is happening on the court, the field and of course the racetrack.

Given that Secretariat is her favourite athlete, she hopes to someday witness a Triple Crown unfold. This difficult feat hasn't been accomplished since Affirmed won the Kentucky Derby, Preakness Stakes and Belmont Stakes in 1978.

For this reason, Hayley continues to wait for the next big sports story to spring forth from the gates.

Masters Student. Sports Lover. Fitness Fanatic. Originally from the West Indies, Hayley loves everything to do with sports. Equestrian turned journalism student, she needs to know what is happening on the court, the field and of course the racetrack. Given that Secretariat is her favourite athlete, she hopes to someday witness a Triple Crown unfold. This difficult feat hasn't been accomplished since Affirmed won the Kentucky Derby, Preakness Stakes and Belmont Stakes in 1978. For this reason, Hayley continues to wait for the next big sports story to spring forth from the gates.

Yes, the A/C is still running in Kerr Hall