Although Leslie Bone is pursuing a PhD in molecular science at Ryerson, she sometimes feels like she’s not that smart.

“There are so many brilliant scientists at Ryerson. Sometimes I feel like I can’t ever be at that level. Sometimes I put myself down, like, well, I’m not that smart. Or [when I am] at a conference, and people are going to ask me questions on my poster and I’m not going to be able to answer any of it,” said Bone, who is also the co-founder and president of Women In Science at Ryerson (WISR). 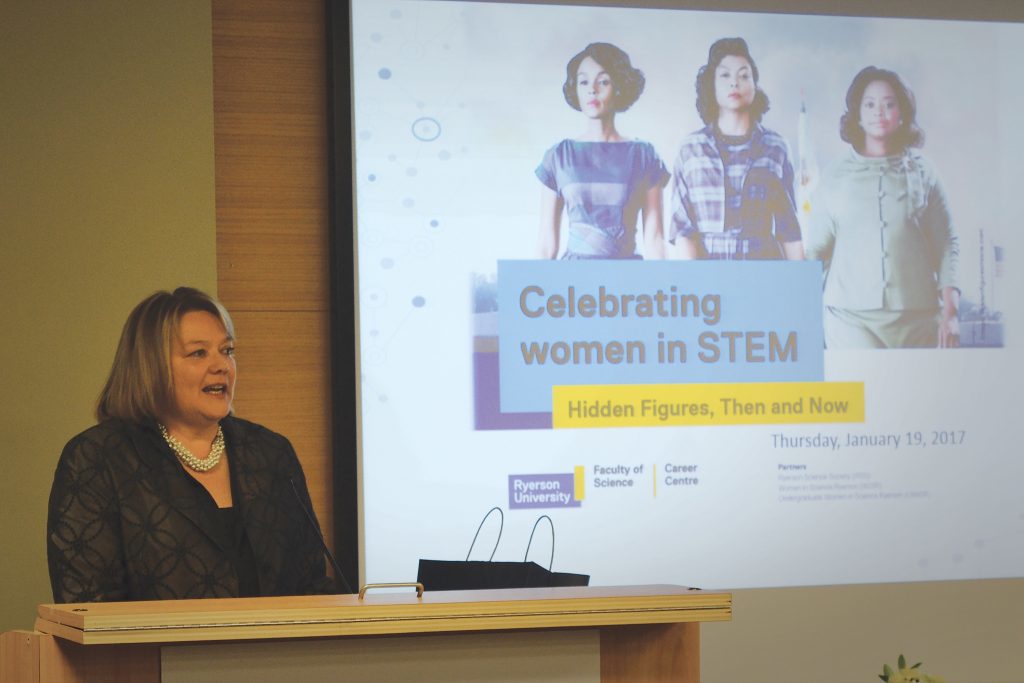 Imogen Coe, dean of the faculty of science spoke a few words at the private viewing of the film Hidden Figures hosted by the Women in Science at Ryerson. (Deni Verklan/Ryersonian)

The high level of imposter syndrome amongst female science students and professionals is one of the reasons why there has always been an issue of gender imbalance in science, technology, engineering and mathematics (STEM) programs, according to many women in science interviewed by the Ryersonian at the WISR Hidden Figures event on January 19.

Dean of the Faculty of Science, Imogen Coe, says this is true at Ryerson depending on the discipline. “Women are more likely to pursue life sciences, like biology” said Coe.

Second-year Ryerson biology student Jacklyn Cunningham says she felt that way after failing Grade 11 math twice. It wasn’t until her Grade 12 physics teacher encouraged her to keep trying that she realized that she could still pursue a career in environmentalism.

“I wouldn’t be here if it wasn’t for her,” said Cunningham. “She pushed me harder than any other teacher I’ve ever had, and here I am now.”

Now, Cunningham turns to her fellow women in science for support through WISR events. On Thursday, she joined a room full of women and a handful of men to discuss the problems surrounding the lack of gender and ethnic diversity in Ryerson’s STEM programs.

Although most students identified with internalized sexism, like imposter syndrome, keynote speaker Shohini Ghose spoke about some of the externalized sexism that still exists in the STEM fields.

“The other students didn’t seem to notice me. When there were homework groups being formed, I wasn’t really asked [to join]. Most of the time I would do the homework myself. I had the answers, but I wasn’t really asked [to join] unless I approached them. The professors were the same way too. My professors would walk in the class and say, ‘Good morning gentlemen,”’ said Ghose.

Ghose also spoke of times where she was asked to do menial tasks at conferences and endured rape threats by two male students, who were later arrested.

The support and networking event ended with a private movie screening of Hidden Figures, the formerly untold story of three women of colour who played key roles in putting NASA astronauts into space in the 1960s.

For Coe, the film screening of Hidden Figures was important in its acknowledgement of Katherine G. Johnson, Dorothy Vaughan and Mary Jackson’s contributions and how “we should realize that there are many women who do contribute and don’t get the credit or the acknowledgement.”

“It’s nice to see that in media because media is one of the areas where we see women in STEM the most underrepresented,” added Coe. “In science, the higher up you go, the fewer women you see. It begins to feel a little bit lonely. You don’t get to see yourself reflected.”