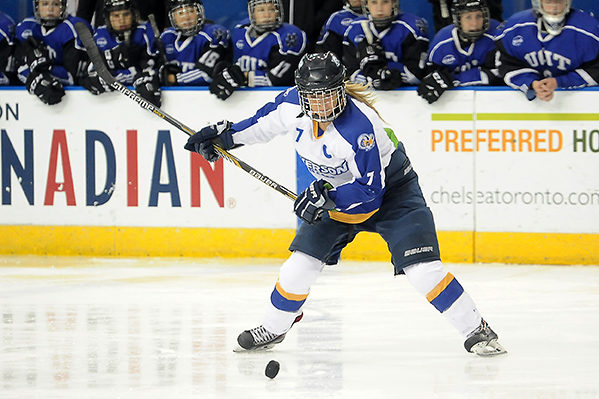 As Ryerson women’s volleyball star Emily Nicholishen stares out the window on the team bus, she reflects on her time with the team and the end of her Rams career. She thinks about how she’s the only player from her recruiting class still on the team. She remembers the time she ate a cookie her coach, Dustin Reid, threw at her without knowing he actually chewed it up before flinging it. Most of all, she thinks about how young and naive she was at the beginning of her Rams’ career.

“When I was a younger player I would constantly think of recruiting as many people as I could to come watch our games, trying to take things super seriously in practice,” said Nicholishen. “But now I’m taking things in stride and enjoying things a bit more.”

Nicholishen has even more time to think about her journey these days because of a sprained ankle she suffered against the York Lions. She rolled her ankle landing on her teammate’s foot after attacking the ball. Nicholishen is aiming to return to play Feb. 19 or 20.

“It does suck but honestly it could be way worse than it is,” she said.

Women’s hockey captain Jessica Hartwick is going through a near identical situation. She injured her knee when a player from the Windsor Lancers slid to block her shot and knocked her down in the process.

It was another tough break in a season filled with many for the fifth-year defender. Hartwick thought the program would continue its rise up the ranks after making the playoffs for the first time in team history last season and barely losing any players this year. Instead, her team is dead last in the OUA with a record of 3-17 this season.

“You don’t want to lose too much sleep over what is going on,” said Hartwick. “For me it’s remembering what it feels like to be on a high and to be winning games so that way I’m just not focusing on all the bad stuff.”

Before coming to Ryerson, Nicholishen thought more practice led to better results, but Reid showed her the importance of having a quality practice and pacing yourself.
“I used to get very frustrated when we would only practise twice or three times a week,” said Nicholishen. “When in reality a good practice is better than just getting exercise.”

In Nicholishen’s second season, the Rams shocked the OUA by putting together a dominant 14-4 season. Since then the team has transformed from the laughing stock of the league to one of its powerhouses. 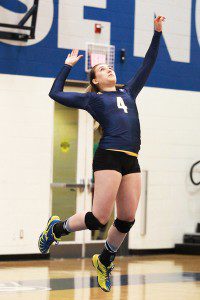 Hartwick has been with the women’s hockey team since the beginning. The team’s first season was in 2011 and Hartwick is one of two players remaining from that roster.

“When I committed to Ryerson five years ago now, I knew it was going to be a building process. I knew we weren’t going to win a lot of games,” she said. “My favourite memory is making that playoff step. It is a big accomplishment for a team that’s only four years old to make the playoffs.”

Although Hartwick hopes to return to action Feb. 18 for Ryerson’s final home game of the season, she is starting to think about her future. She plans to apply for this year’s Canadian Women’s Hockey League (CWHL) draft.

The CWHL is the premier professional women’s hockey league in the world. It’s home to Canadian Olympic gold medallist such as Natalie Spooner and Hayley Wickenheiser. She also has plans to go to teachers’ college in case things don’t pan out with the CWHL.

“It’s a little bit bittersweet because obviously you want to grow up, but at the same time you want to keep playing hockey,” said Hartwick.

Nicholishen plans on travelling abroad and teaching English in Japan once she graduates. She doesn’t plan on playing high level volleyball again, but she would like to coach while teaching art or science at a high school. For now she’s focusing on her rehab and her final game at the Mattamy Athletic Centre.

“I’ve pictured my senior night, over and over and over,” said Nicholishen. “Sometimes I lay in bed at night and I think about it and I actually make myself cry.”