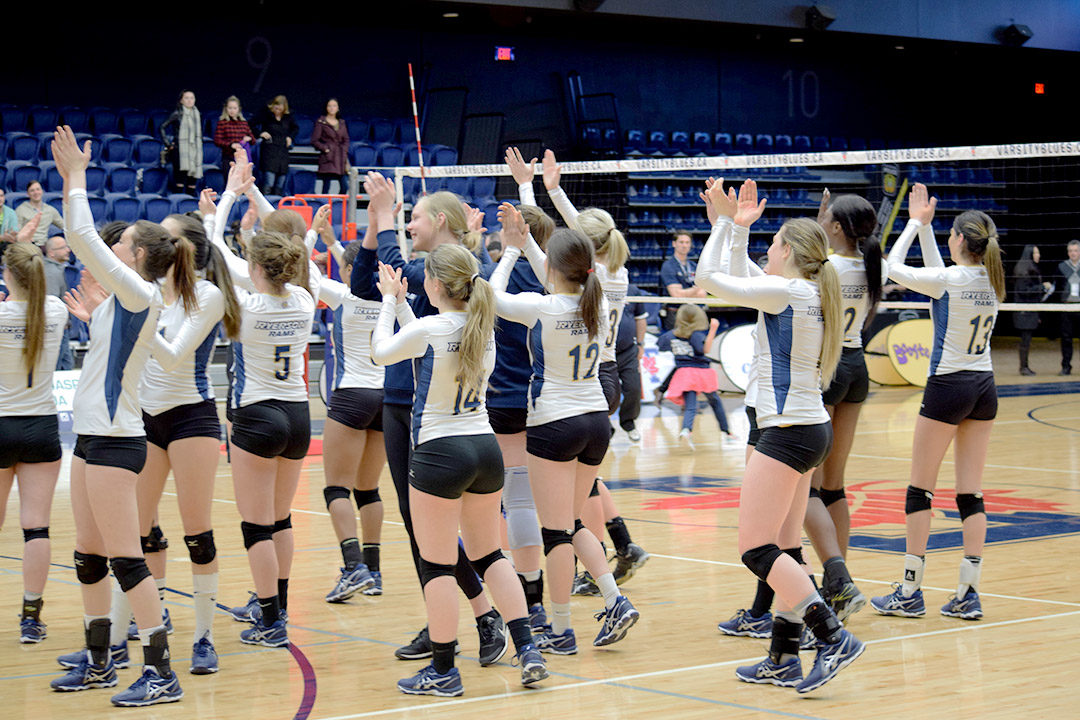 The Ryerson women’s volleyball team fell short Saturday night when it was defeated in Ontario University (OUA) finals action by the University of Toronto Varsity Blues in three straight sets, gaining themselves a silver medal.

The Varsity Blues had zero losses coming into this game and two of their 21 wins were 3-0 victories against the Rams back in November and January.

This was the Rams’ first trip to the OUA championships since the 2001/2002 season.

Both teams traded points in a close first set. The Rams gained a small lead early, but the Blues were fired up and took the lead for themselves.

The Rams regained momentum late in the set. But the Blues won the first with a score of 25-20.

The Rams played hard in the second. After some back-and-forth action, the Rams were unable to grab the win, and the Blues took the second set 25-20.

The undefeated Varsity Blues were unstoppable.

Dustin Reid, head coach of the Rams, said the Blues’ play in the third set was “unheard of,” since they did not make a single hitting error.

Ryerson could not control the game in the third and lost with a heartbreaking score of 25-13 to end their season.

“Toronto served very tough,” said Reid. “I think they saw their opportunity and I think we were trying to find the emotion and a way to crawl back in.”

After putting up an impressive 19 digs, Julie Longman, the Rams’ player of the game, said, “We would have wanted to go out a little stronger than the way we did. I was hoping for a fifth set. If I’m going to lose, I want to lose 15-13.”

Longman said it was difficult to come out confident as a team after being down two sets.

Middle blocker Theanna Vernon, who ended the game with nine kills, said the game was a “roller coaster of emotions.”

“Toronto played an awesome game,” said Vernon. “It would have been good to see us get some good passes up and set up a nice ball for our outside and middle blockers.”

Despite the tough loss, the Rams praised Toronto for their great play and the team remained positive.

“The best part of the match was just for people to believe that we belong at this level playing against programs like Toronto,” said Reid. “Whether you are graduating from our team or coming back, to walk away with an OUA silver medal matches the greatest performance we’ve ever had.”

“All the hardship that we’ve gone through this year is so worth it when you get to moments like this, whether they go the way you want them to or not,” said Longman. “I believe so strongly in the team and what we have moving forward and I just think more people need to believe it.”