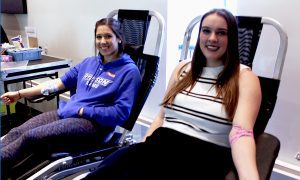 The Ryerson women’s volleyball team held a blood drive in connection with Canadian Blood Services on Tuesday and hit their goal of 43 donations.

The blood drive was held in the Mattamy Athletic Centre (MAC). Christie Robertson, a member of the women’s team, helped organize the mobile clinic with the help of Ryerson athletics.

The drive comes after a popular Canadian Blood Services location at Bay and Bloor Streets closed in December after 42 years, due to construction. The clinic will reopen March 19 on Yonge and Bloor Streets, but the closure still means two-and-a-half months without any donations from that location.

According to Grace Rylett, a clinic supervisor with Canadian Blood Services, mobile clinics in schools are important. “Some of our donors, decades later, said to me, ‘my first donation happened when I was in university,’” said Rylett. “We’d love to see young people come out and make that commitment.”

Abdullah Barez was working out at the MAC when he noticed signs about the blood drive and decided to donate. “I never knew the benefits of it,” said Barez. “And just right now learning that it can help three people…if I have enough blood, why not?”

Though the team had a personal goal of over 50 donations, staff from Canadian Blood Services were aiming for 43 donations, exactly the number they received.

Robertson said this is likely the last mobile clinic the women’s volleyball team will host, but the team plans to have more recruitment sessions at the MAC to educate students on the importance of giving blood.

“I find that Ryerson students are really caring and giving, but donating blood isn’t part of a regular routine, she said. “So they just need a reminder.”