These women chokeslam negative stereotypes in the world of professional wrestling.

Posted by Ryersonian on Tuesday, September 13, 2016

On Sept. 9 at Artscape Gibralter Point, the League of Lady Wrestlers (LOLW) hosted the third and final instalment of the Island Rumble trilogy, a spandex-clad, neon-splattered pro wrestling event that explores issues of gender and power.

The intention behind the event was to take the wrestling ring, a historically male-dominated arena, and turn it on its head. By adopting personality traits that are often deemed unfeminine, such as grossness and brashness, and sprinkling in jabs about gender equality, this league offers its audience a show that mixes pro wrestling and social consciousness.

Big Jody Mufferaw, known outside of the ring as Aubyn O’Grady, created the LOLW in 2013 in Dawson City, Yukon. Initially, it was supposed to be a one-time performance art piece, but it continued to grow as other leagues began to form. O’Grady came up with the idea out of a love of the sport, the desire to put on a great show, and the need for a safe space for women. 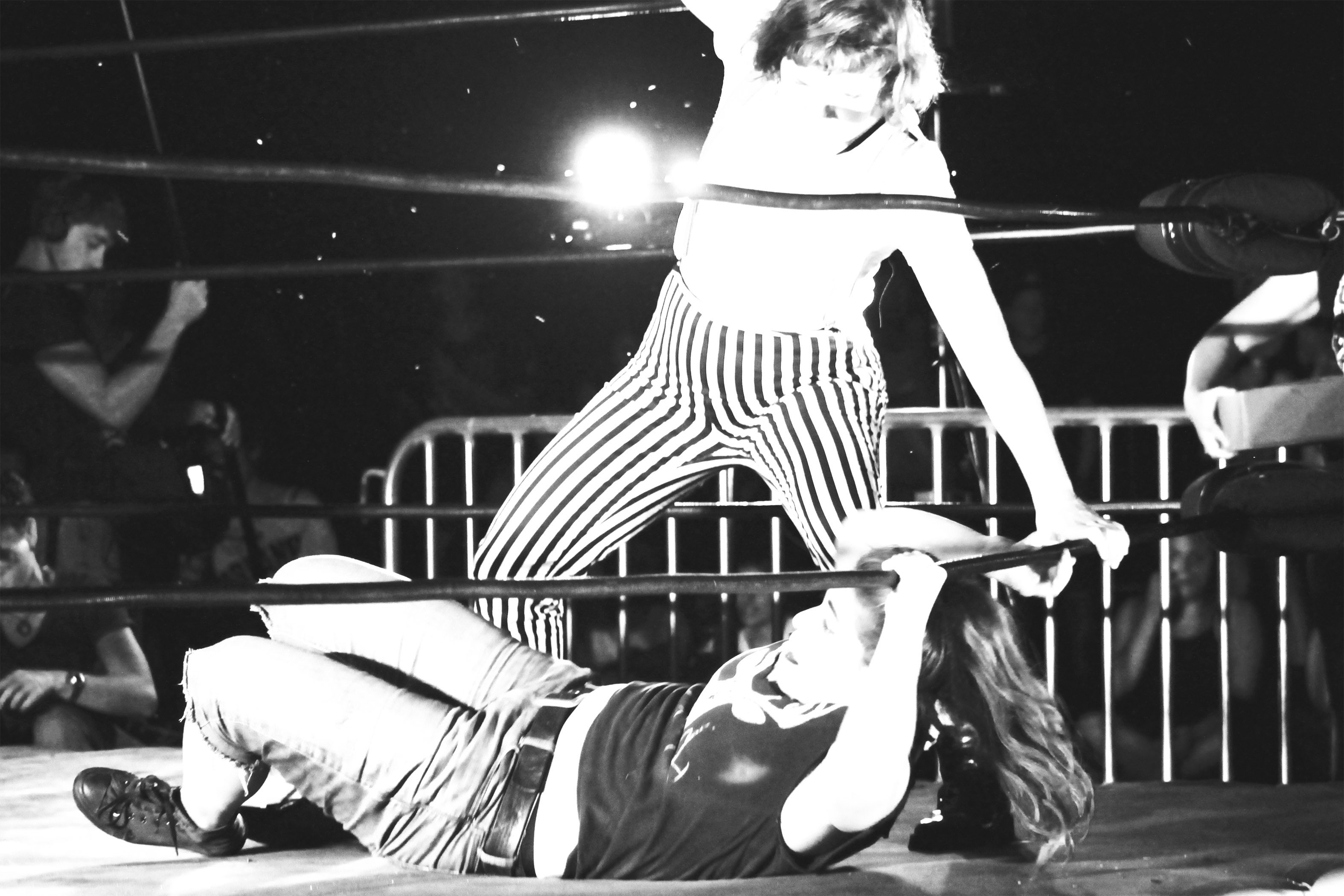 Lady wrestlers at the Island Rumble on Sept. 9, 2016. (Samantha Relich)

“Why is a man doing a woman’s job?” yelled the fight promoter, after the male referee cost Dykemaster 3000 a championship. While Dykemaster 3000, who was sporting a mullet and her signature short shorts, and her coach Richard, costumed as a giant phallus, danced in the ring and played up the crowd, Big Rig, whose real name is Jennifer Crawford, snuck up from behind and took the pair out.

“I felt like it was a bit of a dirty fight. I was in the middle of a dance interlude and it was rude to be interrupted. If I had a normal fight with Big Rig, I would have kept my title,” Dykemaster 3000 explained after the fight.

Big Rig would go on to lose the next match against Doughnut Messaround, a.k.a Acacia Christensen, whose trademark moves are known as the Boston Cream and the Jam Slam. The man supplying Doughnut Messaround with doughnuts was emphatically referred to as her “doughnut bitch.” 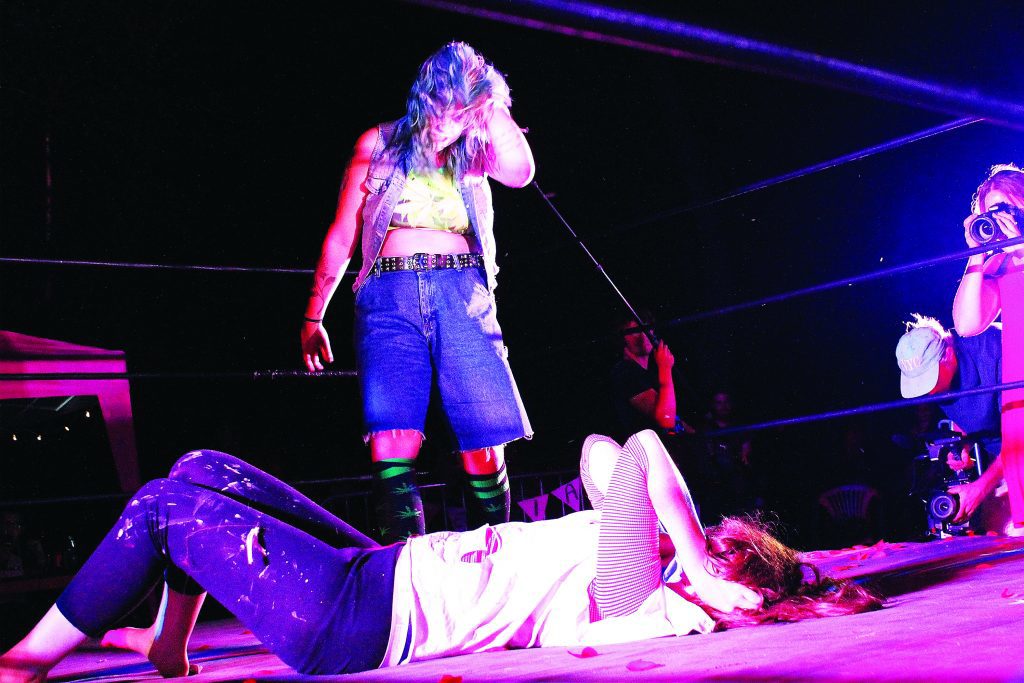 Although everything about the event was in your face, the underlying message was subtle. It wasn’t necessary to be an expert on pro wrestling to understand that the event was a chance to challenge the stereotypes in the world of sports entertainment.

“I feel like in mainstream wrestling it is very misogynistic and it is about men, and the women who are wrestling in that field are often sexualized and objectified,” said Emily Scherzinger, also known as Gravestoner.

One match featured Sqrue Younicorn, a woman dressed as a unicorn sporting a rainbow-dildo horn, against someone acting like a feral animal, while another featured a person dressed as Dolly Parton battling Nick Carter from the Backstreet Boys.

The event’s diversity was not confined to the wrestling ring and was reflected in its audience members. “Not one person was the same,” said Scherzinger. “There were older people and younger people, and it was the same with the wrestlers. I love that diversity because it reflects the world we live in. It’s an exciting safe space for people who don’t fit into the mainstream … whatever that is.” 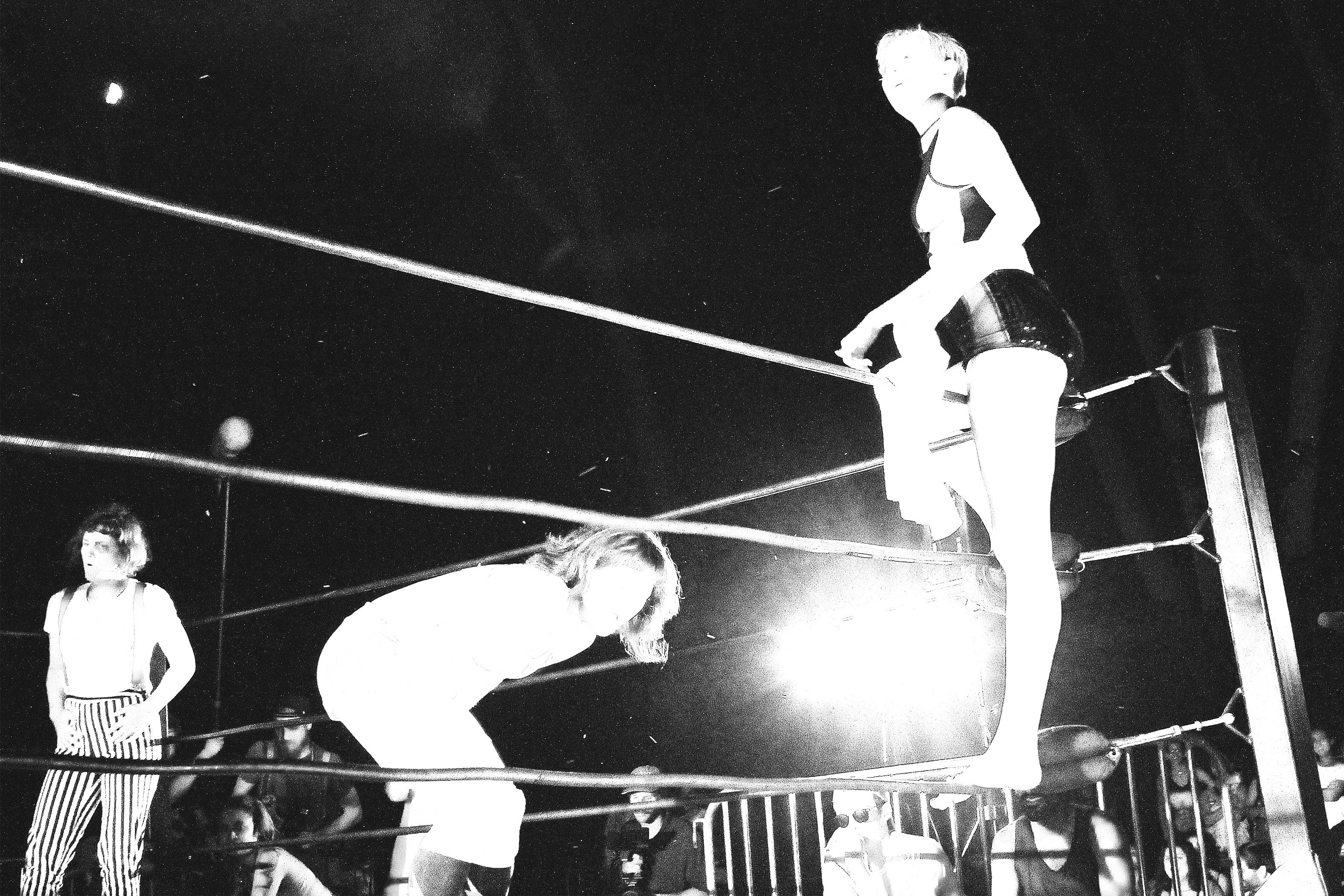 LaLahoney doubles over as Crimson Wave looks on. (Samantha Relich)

While the in-ring wrestling was not the most technical or professional, the storylines and theatrics more than made up for it. Fans chanted the names of their favourite wrestlers while passionately booing the villains. They cheered and whooped when something exciting happened.

“Get more cruller, Doughnut!” one fan yelled during Doughnut Messaround’s match. The audience howled with laughter while the announcers acknowledged the ridiculous pun.

“It’s more theatrical, but it’s humorous and it’s fun,” said John Todd, a longtime wrestling fan. It was Todd’s first time going to a LOLW event, but the tall, grizzled man with a Stone Cold Steve Austin t-shirt was chanting and laughing along.

They hope that with more events, the fans of the usually macho, mainstream wrestling shows will hear their message and begin to question the norms and stereotypes of pro wrestling.